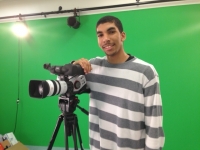 “I was thrilled, excited and nervous all bundled into one,” Harper said. He added that his film’s humorous look at a day in the life of a Heights student came from staying true to his own creative instincts. “When Mr. Glass told me about the competition, I started thinking about complex things. But when it came down to doing it, I went with what’s natural to me.  I’m a comedian and it paid off.”

Harper went home with $150 in gift certificates and valuable contacts in Cleveland’s film community. Harper’s dream is to continue making films in college and then turn his passion into a career in the film industry.

All five of Heights High’s film entries were well received by the enthusiastic audience. Jeff Glass, Heights High’s video production instructor, was not surprised. “The film work coming out of our program can compete with any school—public or private—in Northeast Ohio. We have extremely talented students, and we appreciate that this film festival, and others like it, are providing this type of exposure for their work.”

Antonio Harper said that he felt well prepared by his four years of working in Glass’s program. “From storyboarding, to setting up shots, to lighting and filming; I learned how to take an idea from my imagination and bring it to life!”

Harper’s film will be available for public viewing by the beginning of May, when all of the films in the competition will be uploaded to Hathaway Brown’s iMagine Film Festival website.

Bill Kramer is a local freelance writer and parent of a Heights student.