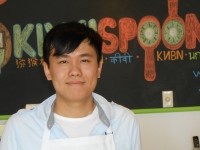 For decades, Coventry Road has been one of Cleveland’s most eclectic—and successful—shopping districts. Over the years, the shops and restaurants on the street have changed to reflect the times, and now, with summer almost upon us, Coventry Road is changing again.

Two new frozen-yogurt shops have opened. Phoenix Coffee, a longtime fixture on the street, is moving. The old Centrum Theatre has become a video dance club, and the B-Side Liquor Lounge is transforming into a video-game arcade.

“These are all independently owned businesses,” said Steve Presser, owner of Big Fun toy store and marketing director for the Coventry Village Special Improvement District. “We try to stay one step ahead of other shopping areas, and we want to bring new people to the street. It’s a very walkable neighborhood, with morning, afternoon and evening traffic.”

One of the new frozen-yogurt shops, Piccadilly, is near the north end of the street, in a space that had been vacant since the Grog Shop moved up the street 10 years ago. Owned by Romanian-immigrant brothers Adrian and Cosmin Bota, the shop serves organic, artisan yogurt, with toppings, including fruits, that are all fresh and locally produced. The furniture is made of reclaimed wood, including some that came from the old Grog Shop’s doors. The brothers moved to Cleveland in 1991 and worked at the West Side Market as kids.

Another frozen-yogurt shop, Kiwi Spoon, is owned by Mao Lin, a Tallmadge native who studied accounting at the University of Akron. The shop is located above bd’s Mongolian Grill and will serve gluten- and fat-free, low-sodium yogurt. Kiwi has a clean, modern look, and features a bar table along its front windows, where customers can sit and look out over the street.

The former Centrum Theatre, which has hosted several businesses since closing as a movie house, is now Club Centrum. Operator Mike Mercer, who grew up in Cleveland Heights, sees the club as a kind of homecoming. Mercer hopes to attract many age groups to a program of music presented by deejays, and videos shown on the big screen. Thursday is college ID night, when the club is open to those 18 and older. Fridays, which feature electronic dance music, are restricted to those 21 and up, and Saturday nights are the club’s old-school-music nights, geared to those 30 and older. Mercer, who previously ran Club Coconuts and Howl at the Moon in the Flats, is hoping to use the club for private events on other nights. Pay-per-view TV and sports events are also planned.

Just up the street is B-Side, one of the city’s first electronic dance-music clubs. Located under the Grog Shop and, like the Grog Shop, owned by Kathy Blackman, the club had closed on April 7 for renovation. Now called the B-Side Liquor Lounge and Arcade, it features 30 classic arcade games, ranging from Pac Man to Mortal Kombat, as well as pinball machines and other games. “We've been a popular dance club for 10 years and, instead of waiting for our buzz to die, we wanted to be proactive and add something fun to our already popular design,” said Brad Petty, the club’s manager.

The other big change on the street is Phoenix Coffee’s planned move to the former C. Jones Books & Tea Shop space at Coventry and Hampshire roads later this year.

During the summer, as in the past, Coventry will offer special events, including outdoor movie screenings in Coventry P.E.A.C.E. Park and live music on the street.

James Henke was a writer and editor for Rolling Stone magazine for many years. He has also written biographies of Jim Morrison, John Lennon and Bob Marley. He lives in Cleveland Heights.