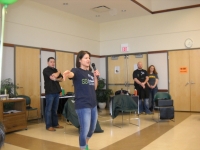 Krissy Gallagher speaks to attendees of the St. Baldrick's fundraiser.

On March 10, more than seventy people either shaved their heads or donated hair to be made into wigs at the Cleveland Heights Community Center. Organized by Cleveland Heights resident Krissy Gallagher, they raised $44,180 for St. Baldrick's Foundation for childhood cancer research.

Gallagher's son Austin was diagnosed with bilateral Wilm's tumor in both kidneys in 2007. After chemotherapy and four abdominal surgeries, he relapsed in December 2009. On St. Patrick's Day following Austin's diagnosis, his father, Mark, shaved his head at the annual St. Baldrick's event at A.J. Rocco's in downtown Cleveland, and he has done so every year since. Austin's older brother Braedan joined his father in 2010 (during Austin's relapse) and Austin joined them in 2011.

Krissy Gallagher decided to host a St. Baldrick's event geared toward children and teenagers at the Cleveland Heights Community Center.

This was the second year the Cleveland Heights event was held. In 2012, there were about 50 participants and the event raised $36,256.

"These events are just incredible," said Krissy Gallagher, "It is so moving to watch people, young and old, male and female, get into that chair and make such a sacrifice, often for someone they don't even know."

A team of students from Cleveland Heights High School, called the "Buzz Buddies," raised more than $3,000 and was consisted of juniors Desi Pelligree, Charles May, and Kevin Lissemore, and seniors Katy Collyer, Luke Boyle, and Alec Radivoyivetch.

Braedan Gallagher said he participates in this event every year because "it's fun and it's for a good cause." He recruited many of his friends at Fairfax to join the team.

Abra Lisowski, who donated eight inches of her hair, was inspired to participate after attending the 2012 event, and said, "Last year's event was fun, and it's a good cause."

Today, "Austin is great!" said his mother. "He's lost his entire right kidney and half of his left and is currently in stage 3 renal failure. He will one day need a transplant, but his kidney is working right now and he is a completely normal and active (and fearless and athletic) 6-year-old." His family plans to continue its involvement with St. Baldrick's until childhood cancer is completely gone.

Simone Quartell, a Heights High graduate, is a student at Cleveland State University and a Heights Observer intern.