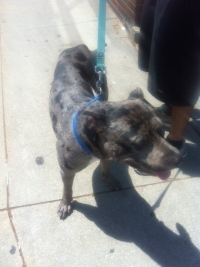 Beast, a Cleveland Heights dog who would enjoy a walk in the park. Photo by Christina Sanders.
View Image Gallery

“Dog owners think of their pets as part of their family,” said Hannah Baldwin, Dog Project Committee member. “Dogwalking will increase activity in the park on a daily basis. It will put more eyes on the street and make the park safer for everyone.”

"We've met with city staff, and council is due to vote on it in February," she said.

Baldwin said the committee seeks to educate dog owners about their responsibilities to ensure that they respect the rights of those who don’t own dogs or are afraid of them. “Dogs must be leashed,” said Baldwin, “They won’t be allowed by children’s play areas, and they must be picked-up after. These are the same courtesies that you observe when walking your dog on city streets, and we want to make sure that residents understand that it is essential to follow these rules, for everyone’s safety.”

The committee plans to place four stations within the park to hold biodegradable dog waste bags and to post signs reminding dogowners of their responsibilities. The committee is seeking volunteers to help replenish the bags and to assist in maintaining the project’s website. For more information, contact the project’s volunteer coordinator at chdogproject@gmail.com or 440-478-6226.