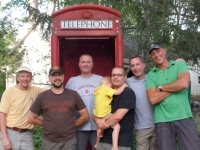 The 2012 Olympic Games may be over but memories of London will live on for one Cleveland Heights family—in their backyard. On the closing day of the 30th Olympiad, family and friends of Chris and Amy Barr pitched in to erect a classic red telephone booth (or box as the Brits call it) in the backyard of the Barrs’ Coleridge Road home.

Thanks to Olympic caliber teamwork, the iconic structure was reconstructed under a sprawling oak tree to bring a bit of the British Isles to the neighborhood. Weighing in at 1,650 pounds, the cast iron phone booth was originally purchased by Tom and Cheryl Mackie, Amy’s parents, while the family was living in England. Following their return to the United States, they installed it in their yard on Chatfield Road.

After Tom retired, the Mackies left Cleveland Heights and the booth was put into storage. Tom says it’s great to see the box back in the neighborhood.  “This telephone box was made in Scotland, so it has a Scottish crown, rather than an English crown on the top," Tom noted. "When we bought it, the booth was covered with graffiti and layers of paint. After drilling out every bolt, we had someone strip, prime and repaint it in the original colors.”

Tom said that this box is a K6, a model designed in 1935 to commemorate the silver jubilee of King George V. It was the first red telephone kiosk to be used extensively outside London, and has become a British icon.

Installing the box in the Barrs' backyard took most of a day and a team of workers to reassemble the structure, after Tom had previously poured a concrete base to support it.

Now the Barrs will have to determine what role the kiosk will play in their lives. “I think it may become a home for birds,” said Amy Barr. “With flowering vines, it should quickly blend into our backyard.”