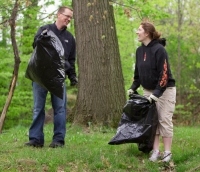 The CPNA organized a cleanup event at Cain Park to enhance the park's overall atmosphere and make the area look more inviting. (Photo Courtesy Of CPNA)

Since its inception late last year, the Cain Park Neighborhood Association (CPNA) has focused on making a difference in the community.

“Our goal is to reduce crime by having a greater presence in the neighborhood park,” Titas said. “If there are people using the park, crime is less likely to occur. At least, that's our logic. The police and city have been great. They've installed call boxes, increased the number of bike patrols, and listened to our concerns. But if we want crime to go down, we need to be an active part of the solution.”

Michael Kinsella, another executive committee member, was robbed at gunpoint in the park two years ago. “It was pretty traumatic,” he said. “Everyone heard about the incident, but a lot of people didn’t know it was someone on our street. I think if that happened again today, we’d all rally together and be able to help that person. It’s that fear and isolation that we’re trying to overcome.”

Kerri Whitehouse, also a member of the executive committee, said safety is one of the group's top priorities and is one of six committees established by CPNA. The other committees focus on park improvements, communications, event planning, housing concerns and welcoming dogs to the park.

Whitehouse will head the dog project. “We’d like to be able to get the rules in Cain Park changed so that people can walk dogs in the park,” she said. “I’m a longtime dog owner and it’s always mystified me that a progressive area like Cleveland Heights doesn’t allow dogs in parks.” Plans for introducing dogs are still in the early stages, but Whitehouse noted that the city has been supportive and receptive to them.

During the past two months, CPNA organized a park cleanup and its first community picnic. According to Kinsella, the group is working to bring other benefits to the park, such as concerts, a summer neighborhood block party, sledding days and movie nights.

“We’ve seen considerable improvement in safety, cleanliness and morale, all in a very short time,” Kinsella said. “We’ve all been recharged and reminded of why we chose to live in the neighborhood in the first place. The interest and momentum is just building. At every meeting, we’ve had more attendance; we had about 40 people at our last meeting.”

More details are available at http://www.facebook.com/groups/CainParkNA/. Meetings are open to the public, and take place at the Cleveland Heights City Hall on the third Thursday of every month, at 7:30 p.m.

Kelli Fontenot is a writer and editor living in Cleveland Heights.