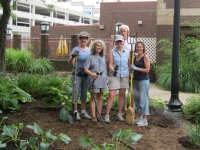 Gary Lustic and his wife Julie, residents of Cleveland Heights, initiated a community effort to revamp the mini park that sits between the Heights Arts Gallery and Lemon Grass restaurant on Lee Road on Saturday, May 26.

“We looked at the park and thought, this is a gateway for a tourist attraction,” Lustic said. “Everyone who comes to a movie walks through this park, and there was garbage strewn and weeds everywhere. So we said, why don’t we take on this park?”

The Lustics approached Heights Arts, the nonprofit gallery that abuts the park, and got an enthusiastic response from Peggy Spaeth, the organization’s executive director.

The Lustics, and other volunteers they and Heights Arts recruited, replaced weeds with perennials and dry soil with lush vegetation. Seven volunteers started planting at 9 a.m. and didn’t stop until the project was done. The City of Cleveland Heights donated three loads of mulch. Many others contributed planting materials.

There was no master plan for the park’s garden. “Our Iron Chef analogy is, whatever ingredients come, chefs have the challenge of making something edible out of them,” Spaeth said during the planting. “So our challenge is, whatever anybody brings today, we’re going to make work and so far, it’s working pretty well.”

Spaeth noted how amazing it is that someone who lives in the neighborhood took the initiative to help with something that needs attention and actually do something about it.

“We would love to activate the mini park.” Spaeth said. “I know there are some long-term plans that the Cedar Lee SID has made to completely renovate it when they get the funding, but that could be never. In the meantime, why not make it attractive?”

Spaeth’s goal for the park this summer is to bring Heights Arts classes outside and have music there. Her goals don’t stop with the park.

“We’re very interested in making the streets look as creative and as imaginative as the residents who live here are,” Spaeth said.

“There’s plenty of opportunity on Lee Road,” Lustic said. “I lived on Coventry for 20 years and it’s absolutely awesome, so I want to see something here.”

Yelena Tischenko is a senior majoring in magazine journalism at Kent State University and a Heights Observer summer editorial intern.