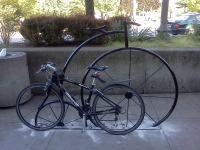 One of the new custom-designed bike racks in Coventry Village is located at Coventry Yard, in the southern part of the district. Photo by Ian Hoffman.

On Thursday, May 10, two new bike racks were installed in Coventry Village.

Before the bike racks were installed, Coventry lacked a designated place for cyclists to leave their bikes. “People would lock them on the fences because there were no real bike racks,” said Ian Hoffman of Heights Bicycle Coalition.

The City of Cleveland Heights is conducting maintenance on ten decorative Coventry fences that have bicycle damage. The fences will cost $200 each for workers to strip, coat, and repaint them. Last August, Hoffman urged the Coventry Village Special Improvement District (SID) to fix this issue. He persuaded the SID to add bike racks on Coventry to encourage bicyclists to come to the area.

“Coventry has always been a bike-friendly neighborhood,” said Steve Presser, director of the Coventry Village SID. He and other SID members considered Hoffman’s solution to the problem. “We found two appropriate areas: one at the north end and one at the south end of the street,” Presser said.

Members of the Coventry Village SID thought that the style of the bike racks should reflect the district’s unique flair. “We found a company here in Cleveland that made unique bicycle racks,” said Presser. The SID decided to meet with Rustbelt Welding Company, a local business that specializes in creating artistic designs. Of the designs that Rustbelt Welding presented, the SID board of directors chose two bicycle-shaped designs to implement on Coventry.

Just after the two $600 bike racks were installed on Thursday, Coventry patrons began to use them. “I've gotten pretty good feedback,” Presser said. “The unique design worked to our advantage.”

“They were both full of bikes. I think people were eager and excited to use them,” Hoffman said.

The Nature Center of Shaker Lakes recently donated an additional bike rack to Coventry. The rack is located in the Marc’s parking lot and does not have the same artistic design as the others.

Hoffman thinks that the racks are a positive addition to the community, pointing out that biking will free parking spaces in the area, offer a more environmentally friendly alternative to driving, and will be a healthy activity for people to enjoy. “I hope that the prominent placement and symbolism of the bikes on the racks will encourage biking to Coventry,” he said.

Simone Jasper is a senior at Beaumont School. She is a staff writer for the Beaumont Voice student newspaper and is an intern at the Heights Observer.