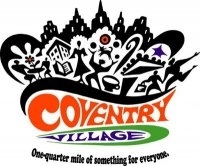 The Coventry Street Fair has been postponed until 2013, but enhanced programming for the Coventry Music and Movie Summer Series aims to keep the community engaged, according to Steve Presser, marketing and publicity director for the Coventry Village Special Improvement District (CVSID).

“We’re going to program more things during the evening,” he explained. “What we want to do is bring positive activities to the Coventry P.E.A.C.E. Park and get the community to come together and celebrate our neighborhood.”

The summer series, a collaboration between Coventry P.E.A.C.E. Park and the CVSID, will feature movies shown on a 20-foot screen in the park at dusk on Thursday nights beginning in June, through July. Genres range from comedy to action to animated films, and all selections will be family friendly, Presser said.

“It’s like a drive in movie without the cars,” he said. “We encourage families to go to the nearby Coventry restaurants and bring food and have a picnic, and celebrate the community.”

Attendees can arrive at the park around 7:30 p.m. on Thursdays to enjoy music and other live entertainment before the screenings. In addition to movie nights, the park will offer other public events, such as kite flying, a drum circle and family kickball on weekdays, according to Presser. Dates and times are subject to change.

Kelli Fontenot is a writer and editor living in Cleveland Heights.