Where heroes dwell: a neighborhood association in the Heights 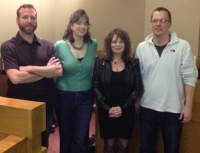 People often point to the past, romanticizing former or fictional examples of heroes. Carl B. Stokes had a successful political career as Cleveland’s first black mayor. Superman was technically "born" in the city. Here in Cleveland Heights, Sue Nigro, Doris Allen, Lana Cowell, and many others, were fighting for equity and equality in housing. But it is post-utopian to think that life was better back then than it is now. It is also a mistake to think that there aren’t any more heroes to stand up and fight the good fight. There are, and these unsung heroes live in your community, forming neighborhood associations in the search for like-minded folks. A vibrant example? The Cain Park Neighborhood Association (CPNA).

CPNA had its inception when Kerri Whitehouse met Anita Pontremoli at a piano lesson. Pontremoli asked for Whitehouse’s thoughts about forming a neighborhood association. Word soon spread as Whitehouse shared her thoughts with Mike Kinsella. He, in turn, asked Pete Titas. The result was a holiday party for the neighborhood.

It wasn’t all festivities and fun, as the neighbors at the party realized that they shared many interests and ideas. Just as Batman might answer to the challenges faced in Gotham, CPNA is inspired by Mayor Ed Kelley’s call to "take back our streets." The neighbors agreed that they were onto something much larger than a onetime block party—it was time to band together for the good of the community. "It’s remarkable what happens when you have a room full of passionate people," said Kinsella.

"When you get down to it, fear in one form or another is almost always at the core of hatred and violence," said Whitehouse. "Many people these days are dealing with some very complex struggles involving loss, devastation, insecurity, abandonment and more. Unfortunately, we’ve seen some violent examples of how that can play out in the Heights, but we as citizens have a choice—become paralyzed in fear that the neighborhood is no longer safe, or do something constructive to help ensure that the neighborhood remains safe. We’ve chosen the latter."

At various points in the past, all of the streets had been part of organized block groups. But none had actually been created around Cain Park. To make the job of organizing everyone easier, CPNA takes advantage of several available options. "We use two social media outlets," explained Titas. "The first is the Cain Park Neighborhood Association on Facebook. Anyone in the world can see that and participate in it. We also use Nextdoor.com for the actual neighborhood, only the streets surrounding the park. That site requires that participants live on one of these four streets in order to join."

"In addition to the social media, we have been delivering fliers, door to door, announcing the next meeting’s date, time and location, as well as our agenda," said Kinsella.

CPNA has also taken advantage of city hall as a meeting space, which it uses on the third Thursday of every month, at 7:30 p.m. "We have been very impressed with, and appreciative of, the level of support and interest that we have received from the City of Cleveland Heights, the police, and city council. We have been encouraged every step of the way; this has bolstered and validated our efforts," continued Kinsella.

CPNA focuses on three areas: neighborhood concerns, such as policing and housing; tangible neighborhood improvements; and building community. In order to address the first, CPNA invited Police Officer Jeremy Young and Council Member Jason Stein to its first meeting to respond to questions from the group. Stein has since agreed to become the association’s council representative. Realizing that some neighborhood improvements are long-term, CPNA plans to advocate for increased lighting and signage, and is "pleased to hear of plans for a splash park in the old wading pool," according to Titas. Building community "might be the most important, but easiest to achieve—with events like block parties and picnics. We’ve also talked about programs that have worked in other cities involving artists revitalizing abandoned and foreclosed properties," he added.

When asked about advice for others wanting to organize their neighborhoods, CPNA members responded, "Just do it. Chances are, your neighbors care just as much about your neighborhood as you do." They also encourage others to talk with city officials, who were willing to help CPNA in every way possible.

Whitehouse said, "The ingredients are all there: interesting possibilities, good ideas, dedication and a desire to do something productive. On their own, it’s odds and ends in the baking cupboard. Together, it’s tiramisu."

More than ever, it is important for our neighborhoods to be organized and connected face to face. Kinsella explained, "Grassroots, community-based efforts have always been powerful agents of change, and we feel that this is especially true today. Perhaps it is globalization backlash, but it seems that, increasingly, people generally want to feel engaged and empowered. The best way to tap into this is to become involved on a local, or in our case, a hyper-local level."

Chris Hanson is a senior in the Urban Studies program at Cleveland State University, a consultant at The Urban Cash Cow, and an intern at FutureHeights.