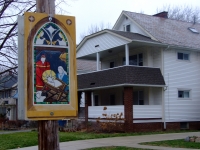 For more than 30 years, East Fairfax residents have demonstrated their holiday spirit by hanging festive billboards from trees and posts along the one-block street during the month of December, according to longtime residents Ron and Marian Kinkopf. The tradition began during the mid-seventies when former residents and art enthusiasts Joanne Sharon and Sarah Knoblauch began creating the holiday-themed paintings. Over time, the paintings have evolved to reflect various holiday religious traditions. Many other residents have donated their time and artistic creativity to restore and replace the billboards through the years, and a dedicated volunteer force faithfully hangs and removes them each year. The project was born out of a strong and well-organized street association that boasts a history spanning more than 45 years.

Richard Stewart is the owner of Digizoom Media and a member of the FutureHeights Board of Directors.