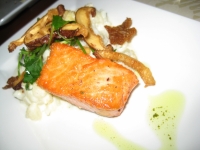 In my ten years in the Heights, I’ve dined at Little Italy restaurants countless times, but at the Baricelli Inn only once. My lone visit was memorable for both the meal and the bill. In less than two months, however, I’ve twice visited the more-accessible Washington Place Bistro & Inn, which took over the former Baricelli Inn’s digs in November.

Two such menu items are the roasted beet and goat cheese salad ($9), which spotlights beets and greens from The Chef’s Garden and Mackenzie Creamery ranch, and the oxtail pierogies ($13) from Ohio City Pasta.

On the dinner menu, the dayboat scallops with butternut squash risotto ($21) was a crowd pleaser. The pan-seared wild Pacific salmon and the accompanying cauliflower gratin ($13/$18.50), which also is available for lunch, was savory and memorable.

For brunch, the monkey bread ($4) is a can’t-miss dish. During our visit, our server brought us a complimentary serving when we were seated, and it was so delightful that we ordered another. The rich biscuits and gravy ($9) with white cheddar biscuits and homemade sausage warmed the belly on a cold afternoon, but the WP burger ($10.50) was underwhelming.

The restaurant offers a number of bargains. For example, the lunch menu features a trio option for $11.50, which includes soup, salad and half of a sandwich. During the 4 to 7 p.m. happy hour, diners can take advantage of the renovated lounge and new full-service bar by enjoying appetizers and cocktails from the eclectic and extensive wine and bar menu for $5 each. The best bargain is the two-for-$40 special on Wednesday evenings, which includes an appetizer, two entrees and a bottle of wine.

Washington Place Bistro is open for dinner seven days a week, lunch Monday through Saturday and brunch on Sundays from 10 a.m. to 2 p.m. The bar is open later after dinner. Seven remodeled rooms at the inn are available for $139/$159 per night.

According to her grandmother, Christina Klenotic is a good eater who never met a carb she didn’t like.