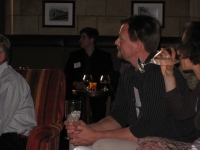 At the May 10 networking forum held by Sustainable Heights Network at Rockefeller’s restaurant on Mayfield Road, the focus was on government. A group of public officials indicated that sustainability practices exist where you may not expect them.

“We believe that the greenest buildings are existing buildings,” said Nancy Levin, director of the CH-UH Public Library. By “recycling” the former YMCA building into a library branch, the library has provided space for additional activities and outside organizations--including Playworks and the Dobama Theater.

Levin pointed out that the concept of a public library is itself an example of environmentally-friendly sustainability: through the sharing of media items and continuous recycling, it reduces the discarding of books, magazines and DVDs.

Levin said administrators are exploring alternative energy sources to power the library, including solar, wind, and geothermal power, but emphasized that the CU-UH library needs continued citizen support to make these changes.

Cleveland Heights Mayor Edward Kelley highlighted the city’s continued recycling efforts to reduce use of landfills. “Over 50 percent of the trash that would be headed to a landfill otherwise is recycled,” Kelley said. He also mentioned planned construction of a pair of solar-powered bus stations to be built on Mayfield and Coventry roads. According to CH's director of community services, Susanna Niermann O’Neil, projects like these are vital to the future of city neighborhoods. "We’re very progressive,” she explained. “Sustainability projects are absolutely what we’re about.”

For example, the city has proactively sought out grants to undertake sustainability projects. These include $200,000 from the Department of Energy to retrofit lighting at the Cleveland Heights Community Center and $238,000 from the Ohio EPA to improve the quality of rainwater runoff at the newly redesigned Cumberland Pool parking lot.

O’Neil said the city is reexamining zoning codes to add eco-friendly elements, such as allowing for solar panels, rain barrels and rain gardens.

University Heights Mayor Susan Infeld also spoke at the forum. She said that University Heights has once again been awarded the Tree City USA Award for the 33rd straight year. The award recognizes the comprehensive tree program that the city has.

Even the CH-UH school district is getting in on the movement. District superintendant Douglas Heuer told the forum that all buildings in the district recycle, though environmental regulations prohibit on-site composting.

As middle and high school students cleaned out their lockers at the end of the school year, sustainability practices reached them, too, with a specific program to encourage their recycling of otherwise discarded items. Other notable practices within the district include the use of local and organic foods in school lunches and the introduction of clean-burning low-sulfur buses--which Heuer acknowledged are 50 percent more expensive to operate.

Robert Brown, from the City of Cleveland Planning Commission, also provided insights at the forum. One of Cleveland’s biggest problems, he said, is the vast amount of land that has been abandoned by residents in recent years.  Cleveland is putting some of this land to use by encouraging urban agriculture in the city. The commission has revised zoning codes to permit urban agriculture, particularly chicken farming and beekeeping. The city has partnered with Gardening for Greenbacks, organization that distributes grants of up to $3,000 to buy agricultural equipment. Currently, there are 230 community gardens and farms in Cleveland.

Dana Finley, editor-in-chief of Shaker Heights High School's newspaper, The Shakerite, is an intern for the Heights Observer. She will attend at Boston University in the fall to study journalism.