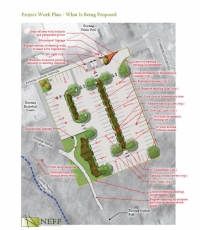 The parking lot at Cumberland Park is being reconfigured and beautified in a project designed to increase the water quality of runoff that drains into nearby Dugway Brook.

The $238,000 project is being funded by a grant from the Ohio EPA, according to Richard Wong, Cleveland Heights director of planning and development.

Key to the project is construction of bioretention basins that, to casual observers, will look like plant-filled medians between rows of parking spaces. Wong said they will work as filters, removing the worst pollutants from rainwater as it runs from the parking lot into the drainage system, which empties into the Dugway Brook ravine on the park’s western edge.

Despite installation of the basins, the project will add five parking spaces, raising the capacity of the parking lot to 105 cars.

It also allows for some safety improvements. In one, the driveway entrance will be rerouted to curve left on entering. This will create a buffer between the driveway and pedestrian traffic in and out of the pool area.

The bicycle path that runs down a steep hill from Euclid Heights Boulevard also will be rerouted to connect with the existing bike path that runs throughout the park improving the current layout, which takes bicycles down a hill and directly into the parking lot.

Surveying work began in mid-January and the project is scheduled for completion by the time the swimming pool opens in June.

Bob Rosenbaum, a lifetime resident of Cleveland Heights, has been visiting Cumberland since the early 1960s.