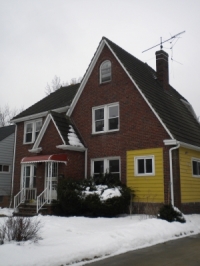 City records indicate the house at 1610 S. Taylor Road, owned by one of Uri Gofman's management companies, received an escrow waiver on $49,750 of Class A housing violations, of which 65 percent remain unrepaired while Gofman's assets are frozen.
View Image Gallery

In January, a story by Channel 3’s investigative reporter Tom Meyer indicated that Cleveland Heights Housing Commissioner Rick Wagner, at the urging of the FBI, may have exacerbated the impact of an alleged mortgage scam on Cleveland Heights. Specifically, Meyer’s report said Wagner waived escrow requirements to repair housing violations, allowing homes to change hands before repairs were made.

In the context of the alleged mortgage fraud—the subject of a 266-page indictment announced last August—escrow waivers allowed the homes to sell faster, ultimately ending up in the hands of unqualified buyers, and later to fall into foreclosure or abandonment.

After the story broke, City Manager Robert Downey asked Cleveland Heights Law Director John Gibbon to review the matter and report on the city’s role in the FBI investigation and its impact on the city.

Meanwhile, an independent review of escrow waivers granted in Cleveland Heights paints a less alarming picture than the one portrayed in the Channel 3 report. It revealed that many of the homes involved in the alleged fraud needed extensive repair before coming into the hands of those named in the indictment, and that they received repairs significantly faster than other homes in similar circumstances.

The review also revealed a potential lack of oversight in the city’s strategy to maintain its housing stock. While the procedure by which escrow waivers are granted is routine and publicly known, it is also undocumented and perhaps undersupervised. It is also unclear whether the policy actually helps to effect repairs.

Under terms of a Freedom of Information Act (FOIA) request, the city provided documents for approximately 250 instances in which escrow was waived between 2006 and 2008. While a review of these documents addressed some of the questions raised by Meyer’s report (see below), it left many others still unanswered.

Did escrow waivers on properties involved in the alleged scam harm the city’s housing stock in any way?

Probably not. There were approximately 1,500 mortgage foreclosures in Cleveland Heights from 2006-2008, according to a variety of real estate sources. The Channel 3 report indicated there were 24 instances during the same period in which escrow waivers were given to sellers who were subsequently indicted in the alleged conspiracy, representing, at most, 1.5 percent of foreclosed properties.

A dozen of these properties were purchased directly by Uri Gofman, the accused ringleader of the alleged fraud, or by one of his companies. Among these, the required escrow amount for repairs ranged from a low of $2,188 to a high of $49,750; most were in the $25,000 range. That means these houses needed significant repair at the time they were transferred.

Within 2-6 months of the original inspection and escrow waiver, nine of the properties had been repaired, reinspected by the city and found to be in compliance with housing code. That’s fast; the process typically takes 12 to 18 months for such extensive repairs, the documents show.

The two properties with the smallest escrow waivers (3553 Cummings Road and 13362 Cedar Road) were sold before the repairs were completed. They were, therefore, subject to a new Point-of-Sale inspection under the new owner, a step that might have been avoided if escrow had not been waived.

The remaining property, 1610 S. Taylor Road, was not brought into compliance by the time Gofman was indicted and his assets frozen. According to city records, about $17,000 in repairs had been made, with $32,550 in work remaining to be done. Refusing an escrow waiver on this property would not have changed the outcome.

Were the repairs done well?

Falsifying evidence of repair work to banks was an activity specifically mentioned in the indictment. However, every home referenced in the documents had been reinspected, often on multiple occasions, by city inspectors. The question then isn’t whether repairs were done, or done well, but onoe not addressed in the records review: whether the reinspections that certified them were thorough and accurate.

How common are escrow waivers and who receives them?

On average, the city grants about seven a month. The current escrow law was written in 2001 and, according to John Gibbon, the practice of granting waivers has been going on at least since then. Of the 250 or so waivers reviewed, roughly half were given to individual homeowners. The other half were granted to professional rehabbers who buy, repair and resell houses.

What is the purpose of allowing escrow waivers?

According to Gibbon, Wagner uses waivers to speed up the rehab process by allowing money to be spent immediately on repairs instead of being tied up in the bureaucracy of an escrow account. It allows the home to be sold and occupied while repairs are made – rather than potentially sitting vacant for months until repairs are completed.

What is the policy and process by which such waivers are offered?

Before receiving an escrow waiver, the seller must provide proof from his or her bank that there is enough money on account to pay for the repairs. In the records review, this requirement was consistently met.

But in response to part of the FOIA request, which sought a written policy about when a waiver is called for or how to determine if it accomplished what was intended, Gibbon said he could not find any such documentation. If the purpose of escrow waivers is to keep houses occupied and in good condition, the city has no formal policy to support it.

If the building commissioner is responsible for granting waivers, to whom is he directly accountable to ensure oversight of the process?

Wagner reports to the city manager, Gibbon said. When asked how much oversight has been provided in this area, Gibbon responded that this is "the subject of an indictment and I’m not able to comment on that at this point. It’s fair to say that the city manager has been aware of the fact that this was being done by the housing commissioner."

Did anyone other than Wagner know if the FBI had asked the city to continue granting escrow waivers to individuals under investigation for mortgage fraud?

Both Gibbon and Mayor Ed Kelley declined comment, citing ongoing legal action. It is a potentially important point; combined with the revelation that the escrow-waiver program was undocumented, it raises a question of whether the high-profile issue of housing repair and foreclosure is being addressed at a policy level, outside of the day-to-day work of the city’s Housing Programs department.

If the law specifically requires that money for repairs be put in escrow before a property can change hands, should there also be a written policy if that requirement is going to be waived in certain instances?

"All public officials have some discretion as to enforcement," Gibbon said. "The way I see it is that [Wagner] has chosen not to require the escrow monies, but to rely on a bank statement. I consider that to be a decision in those instances not to enforce the letter of the ordinance."

Since 2006, about 3,700 homes have changed hands in Cleveland Heights (through Feb. 23), according to real estate data compiled at Blockshopper.com. In the same period, the city has seen at least 1,490 foreclosure filings—a year’s worth of housing inventory—and it has many more homes in declining condition.

The escrow law in question is only nine years old and, according to Gibbon, has been subject to routine exceptions essentially since the day it was written, which would seem to mean that there is something about the law that has never worked.

While all city council members were contacted for this story, none would comment on any part of it, citing the ongoing Gofman indictment.

But Gibbons’ description of his report to council—given verbally during executive session—sounds similar to this independent records review. On one hand, he said his own review found no impropriety by Wagner or his staff in handling escrow waivers.

On the other hand, it raised the suggestion that if the waiver process is really important and constructive for the city, then instead of being allowed to run informally, it should be codified and routinely evaluated for its impact.

Said Gibbon: “The city council very readily indicated, and I suppose in agreement with my thinking . . . that [it] was time for review of the city’s policy with respect to enforcing the escrow requirements of the Class A violations.”

Bob Rosenbaum is a Cleveland Heights resident and member of the FutureHeights board of trustees.

Here’s what a government press release said about it at the time: "Uri Gofman of Beachwood, OH, is alleged to have orchestrated one of the nation's largest mortgage fraud cases by enlisting family, friends and others to invest in his real estate company, Real Asset Fund, with promises of profit. The scheme involved using straw buyers to purchase homes, falsely claiming home improvements were performed on houses in order to refinance them, and then selling houses to unqualified buyers with the assistance of real estate agents, mortgage brokers and title companies.

"Lenders were tricked into believing that the buyers were making at least a 10 percent down payment when they were not, that the buyers had assets when they did not, and that the properties were worth more than they actually were. The defendants siphoned off more than $31 million in profits from their criminal enterprise. Eventually, 358 of the homes fell into foreclosure."

Before a home can be bought or sold in Cleveland Heights, it must receive a Point-of-Sale inspection by a city housing inspector. Any major Class A violations must be repaired before the property title is transferred, or 125 percent of the estimated repair cost must be put into an escrow account by the seller, to ensure that the money is in place for the new owner to make the repairs.

On a case-by-case basis, Cleveland Heights Housing Commissioner Rick Wagner has authorized that this escrow process can be waived if the seller provides proof that he or she has enough money in the bank to make the repairs.

Technically, the escrow waiver allows title transfer of the property; it does not release the buyer or seller from any obligation to make repairs. Once a waiver is granted, however, the city’s only power to ensure that repairs are made is the threat of legal action—a serious issue for a homeowner, but without the same immediacy as blocking the sale.