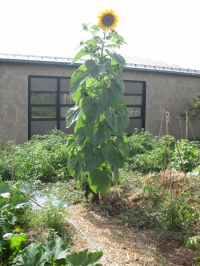 I’ve taken Lee Road going north at least a few thousand times on my way to almost everywhere. This day, as always, I try to peer into the garden at the Fairfax school, long a curiosity. Most gardens are hidden away; this one is out in the open on a busy road. In midsummer, like a sentinel, a single sunflower towers above all else, beckoning. Today, I answer its call.

It’s hot and breezy. School’s out. Two kids meander on a bicycle and teens play basketball.

I meet the barefoot garden manager, Samantha Provencio, and her two children who are joyously spraying themselves and each other with the hose.

The Fairfax garden is divided neatly into 12- by 25-foot plots, nine in all worked by 13 gardeners, some in pairs. Gardeners bring their own tools. Most live within walking distance. It is one of six community gardens in Cleveland Heights getting help from the Ohio State University extension program.

The neat rows, exploding with growth, are beautiful to see—cucumbers, tomatoes, peppers, all kinds of lettuce, chard, Brussels sprouts, beans, broccoli and beets. One gardener has planted sweet potatoes, another leeks.

Sarojini Rao grows Indian vegetables, such as snake gourd, which looks like a zucchini only longer, and a colored cucumber called southe. "I get such a thrill growing the vegetables I grew up with," Sarojini said. She was raised in India, where her father was a farmer. She has been here 40 years.

Sam Wolfe, who volunteers three days a week in a third grade class, gave an interested teacher some space in his plot for her children to plant. They put in marigolds, which will be at their peak when they return to school.

"Lots of Cleveland Heights houses have shade," Samantha Provencio said. "This garden is in full sun and needs lots of watering. I grow beets and pickle them. My son loves them."

The garden has had its own growing cycle. It was started 18 years ago by Marty Grey, a Fairfax parent at the time, and has been passed along like a prized heirloom. "It began as a children’s garden," Marty said. "For the first seven years the teachers used it for teaching. The garden even won an award from the City of Cleveland Heights."

"Marty Grey worked tirelessly," said Rita Bar, who became the next manager. She grew flax and would take it into the school and show the students how it was made into linen. She put her heart and soul into it."

"I kept it going," Rita Bar said modestly. "Three years ago, Samantha picked it up. She added a lot of creative things."

This year Samantha put in a post and rail fence along Lee and the north side of the garden. Everyone worked on planting what is now a lush border of lilies, roses, daisies, lavender, rhubarb and more. All share in the chives, wandering garlic, sage, strawberries and a raspberry bush.

The gardeners meet once a month to discuss communal issues. They water for one another, when needed, and at the end of the season hold a harvest party. They give excess produce to neighbors and to a food pantry.

After the tour, Samantha and I sit on a bench facing the garden. I am wet and sticky, but my shirt dries in the breeze. It feels good. We could be in a Kansas field, not with our backs to busy Lee Road.

Samantha told me that over the winter a cover crop of vetch, peas, winter rye and oat is tilled in to restore the soil. Then the whole garden is tilled in the spring and covered with organic fertilizer.

This year, not everyone who wanted a garden plot got one. Nine people remained on a waiting list. Samantha mentions a dream of expanding.

As I leave, gardener Kirsten Hagesfeld is watering. She marvels at the joy of tending her plot. "It is so healthy," she said, "to be on the ground, alone, working."

Eleanor Mallet’s column, "A Heights Observer," explores the nooks and crannies in the Heights. She can be reached at eleanormallet@yahoo.com.