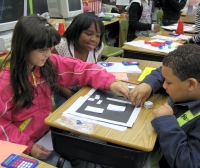 At Oxford’s Fifth Grade Math Carnival, students had fun while carefully recording data and solving problems with a refreshing and inspiring enthusiasm. The Carnival, an annual event in Sean Sullivan’s classroom, culminated a unit on mean, median, mode and range.

“Kids devised their own games, came up with ideas, worked on them at home and occasionally talked to me to make sure they were going in the right direction,” explained Sullivan.  “By the time they’ve created the game, taught it to their classmates, and figured out averages four different ways for each game player, the math really sticks with them.”

On carnival day, the students set up their games, taught others how to play them, took notes on a data collection sheet as students played the game, then calculated various kinds of averages.  They placed numbers in numerical order, to more easily figure out the median — the middle value in a range, which they found by subtracting the difference between minimum and maximum values.  They added all scores and divided by the number of scores to get the mean.  Finally, they note which score appeared most often to find the mode.

The carnival included games of skill and chance, all requiring data collection and problem solving.  Selena created an entire board game, complete with handmade paper dice.  She instructed players to select a card and solve a problem as they moved around the board.  Players of Keandre’s “Did You Make the Goal?” tossed a paper football at a goalpost, winning points for accuracy. Fifth graders’ contagious enthusiasm for math spread when fourth graders attended the carnival.

According to Sullivan, “it’s all about getting and keeping kids excited about math.”