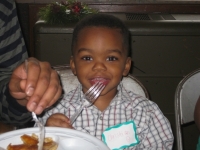 Carolyn Brinkley and Sandra Rueb were site coordinators for volunteers to the Merrick House at Lincoln Park in the Tremont area of Cleveland.  Volunteers arrived early to set up for a holiday pancake breakfast for 100 people. Not only did the women bring food for the breakfast but also boxes of ornaments for the children to hang on the tree provided by Merrick House.

David Smith and his son, Brian, led the singing of Christmas carols. Brian Smith made the rounds of all locations with Gesu volunteers and his keyboard padded and tied to a dolly, much like Santa with his bag of toys. He played, particpants sang and everyone hung ornaments, laughed, talked and learned about one another.

Daycare center parents, the Mom's First program, and former Valleyview Estate adults and children participated in the breakfast. Gesu volunteers included children as young as six years old. According to Carolyn Brinkley, the volunteers needed to not only “welcome and serve guests, but also to mingle actively participate in the activities.” The children played together, adults spent the morning chatting and anyone walking into the room would think this was a typical pancake breakfast of people who were long-time neighbors.

Merrick House was founded in 1919, under the auspices of the National Catholic War Council and is one of the original Cleveland Settlement Houses. The organization has served families from Russia, Poland, Ukraine, Slovenia, Germany and Ireland with desperately needed services. The early storefront building of Merrick House provided English classes, childcare, recreation and neighborhood clubs.

Anita Kazarian is a freelance writer and University Heights resident.