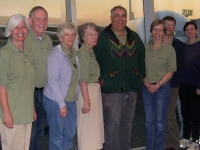 Left to right: A. Kazarian, D. Lewis, J. Lewis, M. Walters, P. Coburn, K. Holzheimer, D. Weber & M. Dacey
In the still dark hours of a cold February morning, 38 people gathered at Hopkins Airport to start their journey to Honduras. A group organized by Gesu, a Catholic church in University Heights, were beginning a week-long mission trip “in hopes of alleviating some of the many needs of the Honduran people.”

Sometimes something more happens to the people who go to help. Volunteers participating in these trips often come to understand “the relative unimportance of things in our lives. It is a reverse mission where we learn some of life’s most important lessons from the poorest of the poor.”

This mountainous country, the second poorest country in Central America, has an extraordinarily unequal distribution of income and high unemployment of 27.8 percent.

The February mission supported two teams: construction and medical. The first stop was Sister Rosa complex in Nuevo Paraiso, two hours into the mountains from the nation’s capital. Sister Rosa’s complex has many family houses, each with about 12 orphans and two tias, or aunts, acting as foster mothers to the children. The construction team’s project was to landscape two playgrounds located in the complex.

After eight long hours on winding mountain roads, detours from landslides, and a stop for lunch at the only lake in Honduras, Lago de Yojoa, we arrived at El Progresso.

The next morning we arrived at the clinic site to find people already waiting. Most wore their Sunday best to see the American doctors. Very young women with nursing babies at their breast, middle-aged men, teenage boys, old matriarchs and patriarchs with umbrellas held over them came.

Pharmacist Dale Lewis was in charge of the nearly 30 suitcases of donated drugs we carried to Honduras with us. The medical brigade was made up of people of all faiths who came to help.

Nurses Matty Walters and Donna Calanog met all 1,400 patients as they took adults' blood pressures. On the last day, these nurses took the readings in the hot sun outside the clinic, while over 550 patiently waited to be seen. Heights residents included Matty Walters, Dale and Jane Lewis, Katie Holzheimer, Anita Kazarian, Pat Coburn, Maura Dacey and Brother Denis Weber.