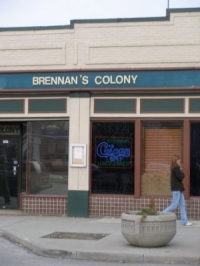 Most of us remember the popular 80’s sitcom “Cheers,” which revolved around a neighborhood Boston pub with friendly bartenders and an entertainingly diverse mix of regular customers that included a psychiatrist, accountant, and a mailman. You will find the same welcoming atmosphere and diverse crowd when visiting Brennan’s Colony on Lee Road in Cleveland Heights.

The pub has a long history in Cleveland Heights, dating back over 70 years. Early photographs provide clues that the storefront was originally a market, which later evolved into a working class bar that began to feature food in the 1950s. During that time, people would line the sidewalk waiting for tables for popular fish frys, vying for the limited tables that existed in the single storefront space. Known then only as the Colony, the pub operated continuously from the 1950s through the 1980s, changing owners three times. Jim Brennan worked at the Colony in the 1980s, and in 1991 became the new proprietor, renaming the establishment Brennan’s Colony.

Since that time, he has expanded the pub from two storefronts to four, and last Fall opened a new outdoor patio behind the pub. The outdoor space was an immediate success, as the patio is well protected from the noise of the surrounding business district, completely surrounded by the pub and the brick walls that were once eight garage bays. With a long granite bar, comfortable tables, summer greenery, and a big screen TV, what is not to like?

To me, the two things that make Brennan’s Colony so enjoyable and successful are the people and the food. The friendly bartenders, wait staff, and neighborhood crowd often refer to you by name, even when you are a once a month regular! And most importantly, the pub fare is high quality and a great value. Jim Brennan has three chefs that he feels have made his pub the success it is today; Jamie Wynnbrandt, Rich Wise, and Kelly Kral have been with the pub for 9, 15, and 25 years respectively.

Brennan’s Colony has a broad menu ranging from excellent salads to pasta to burgers, with weekly chef’s specials featuring the Colony’s more elaborate entrees. One of my favorites is the blackened tuna steak salad. With its meaty texture and Cajun flavorings, it is one of those dishes I get a regular craving for and goes well with a glass of white or red wine. A banker colleague of mine has told me the pork chops are his personal favorite. In addition to the large selection of beer you might expect at a pub, Brennan’s Colony also offers a great list of wines, and most are moderately priced.

If you have never been to Brennan’s Colony before, be prepared for crowds on Friday and Saturday nights, when it becomes a popular gathering spot for families. Weekday nights are more relaxed. In either event, you will get to know the friendly staff, and you may even run into an old neighborhood friend you have not talked to in quite a while. Who says there’s not a real place where (almost) everybody knows your name?

Patrick Paoletta serves on FutureHeight’s board of trustees and is a 10 year resident of Cleveland Heights.