The happy kind of blues 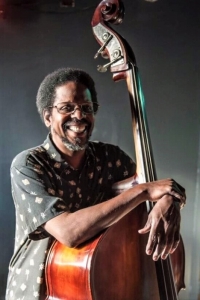 Raymond DeForest was inducted into the Cleveland Blues Society Hall of Fame on Oct. 30. The longtime Cleveland Heights resident has been playing music professionally for 50 years.

The Cleveland Blues Society is a nonprofit organization dedicated to preserving blues music in this region. It sponsors jam sessions, and holds an annual Blues Cruise on the Goodtime III as a benefit to raise funds, with which it provides scholarships to high school students who are interested in blues performance or related fields.

I had a '60s-style folk music group, Long Road, for about 10 years, from 2007 till 2017. Ray was our bass player. He was the rock-solid foundation of the group. We didn’t have a percussionist, and if any of us ever lost the beat—which happens sometimes to every musician—we’d just listen to Ray playing and pick it right back up.

He always played the right notes. It was never fancy; it was just right for what we were playing.

We all sang in that group, though Ray probably a little less than the rest of us. And often, when he would sing something for the first time during a show, a few people would laugh a little; not because Ray is a bad singer—he’s a good singer—but because he’s a bass singer. And you don’t hear many bass singers in anything other than classical music. Plus, some people found it funny that the guy who played bass could also sing bass.

Ray was the only Black person among the six members of Long Road. I sometimes made references to that in my between-song humor. I could hear Ray laughing from across the stage. I always listened for his laugh during my bits in our shows—to know if I was on the right track.

The thing I found most remarkable was this: Over the course of that decade, every few months I would meet some other local musician, we’d talk about our experiences and, at some point, he or she would say, “The guy who plays bass in my band, Ray DeForest . . . .” What? How many bands is this guy in?

I asked him, not long ago. He said that because of the pandemic, which put almost every musician’s career on hold, he’s down to only three at the moment: Blue Lunch (swing), the Spyder Stompers (roots and Americana), and Bent String (eclectic). Among his many bands and accompanist gigs, he has also played with nationally known jazz artists, including Clark Terry. Ray also teaches bass.

So, he plays all kinds of music. He has played, professionally, in bands performing blues, jazz, R&B, rock, folk, roots, bluegrass, swing, and probably other genres I can’t think of.

When I asked him how someone gets interested in playing every kind of music, he turned it around, saying, “I never understood how people could restrict themselves to playing just one kind of music. If I like it and have the opportunity to play it, why not do it? I enjoy it all.”

Not everyone is as open-minded about it. “When I was growing up,” he added, “I kind of had to keep my interest in anything other than R&B and soul music to myself, rather than have people give me a hard time about it.”

“After I had my last clarinet stolen at school, I started playing bass," he said. "My younger brother had one, and I just picked it up and started messing around with it and taught myself how to play it."

He played along with records at first. “A friend of mine brought [local blues performer] Tim Matson down to my basement to hear me, and he asked me to play in his band. That was in ’72.”

He also took lessons. He studied as an upright-bass major at Cuyahoga Community College with Harry Barnoff, then-principal bassist in the Cleveland Orchestra.

But he has played most often with blues bands. Like who? “Well, let’s see,” he said. “There was Mr. Stress, Natural Facts, Aces and Eights, Crazy Marvin, the Mambo Combo, King Solomon and Princess Ladia, and I performed with [Robert Junior] Lockwood.”

Ray, as befitting his personality, was surprised to learn that he was going to receive the honor of induction into the Cleveland Blues Society’s Hall of Fame. “They called me and told me about it,” he said. “It was the last thing I was expecting.”

I didn’t know about it, either, but I’m certainly not surprised. And, you know, in this kind of piece, I can be as biased as I want.