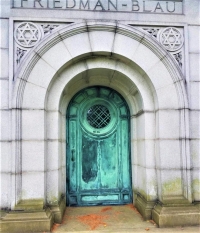 Another Cleveland Heights hidden gem: The beautiful Mayfield Cemetery, the much smaller cemetery immediately to the east of Lake View Cemetery.

I was talking with Susanna Niermann O’Neil before her May 2 retirement from the city of Cleveland Heights, where she had served for 45 years, most recently as city manager. We talked about some of the hidden gems in Cleveland Heights.

I mentioned that when I was involved with the Friends of Cain Park, we used to sell raffle tickets before most Cain Park concerts. When I did that, I talked to as many people as I could about the park. I was always surprised by how many of them—people who had come to hear Lyle Lovett or Sheryl Crowe or Arlo Guthrie, for instance—had never heard of Cain Park before, even though it’s been here since the 1930s and has presented concerts and musicals almost the entire time. Even some people who had lived in Cleveland Heights for their whole lives said they'd never heard of it.

I belong to a Facebook group that focuses on Cleveland-area architectural history. Recently, someone posted an old picture of Cumberland Pool (which looked almost exactly like current Cumberland Pool). Many responded that they'd never heard of it. That’s a little more understandable, since it’s only open to Cleveland Heights residents. Several people said that when they were younger, they only knew of Coventry Village, and they thought that was Cleveland Heights.

The Cedar Fairmount shopping district, which I live near now, was built a few years before Cleveland Heights even was a city. Coventry came along a few years after that. The Coventry library is another hidden gem, even though it’s not exactly hidden. I mean, everyone sees it, but I’m guessing not many from outside the city ever go inside.

I practically grew up in that library. It was built in 1926. I started going there, probably as a baby, with my mother, who later worked there when I was attending Coventry School across the street. I’m always amazed when I step inside the library that it not only looks pretty much like it did when I was a kid, but, also, that it still smells the same. You could blindfold me and take me there and I would know where I was.

If not many outsiders know about Cumberland Pool, even fewer seem to be aware of Cumberland Park. I was recently in London and while there, at every historical site, my mind went back to Cumberland Park, where I would skip school in the autumn and spring of eighth and ninth grades, hiding out in a clump of trees and bushes (which is still there) and read about British history.

Cumberland Park is the home of the Cleveland Heights Veterans Memorial. At its opening in 1943, the program stated it was “dedicated to the sacred valor of those who gave their lives to perpetuate freedom and justice and to all whose bravery and sacrifice have glorified the armed might of America and her Allies.” Several years ago, the Memorial was expanded to honor CH veterans who served in the Korean, Vietnam and Persian Gulf wars.

When I was a kid, the memorial had my name on it. Spoiler alert: I didn’t die in WWII; my father’s brother, David A. Budin, was a U.S. Army veteran. I don’t know why my name disappeared. Neither did Susanna when I talked to her. Maybe someone figured out that Uncle Dave died after the war.

I’ve written before about the benches all over Cleveland Heights. I only discovered them three summers ago, when I started walking for the first time in decades. On one of my walks, I ran into former City Manager Bob Downey and mentioned the benches. He told me that it was no accident; that the city had placed them all around. Susanna said that, too. The benches are all different and I’ve tried them all. As I often say, my motto has become: “I will leave no bench un-sat-in.”

Then there’s the tiny forest just east of the Community Center, that, essentially, connects the Community Center to the section of Forest Hill Park with the baseball fields and picnic area. At the edge of the parking lot, small, barely noticeable signs lead you to hiking trails and several points of interest—both natural and human-made—that you’d never know were there.

That little spot really is well hidden. The others are various degrees of hidden. But they’re all gems.

David Budin is a freelance writer, an author, and a professional musician and comedian.