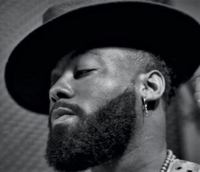 Antoine Dunn is a star. His singles and albums have charted high on Billboard. His songs, including “Can’t Forget” and “Miss My Love,” can be heard on SiriusXM, BET and MTV. The singer, songwriter, multi-instrumentalist, producer and record-label owner also happens to have grown up here. He went all through the CH-UH school system—Gearity, Wiley and Heights High—graduating in 2006.

Dunn, who now lives in Los Angeles, has toured nationally with other top R&B artists. He’ll be performing in Cleveland, at the House of Blues, on Sunday, Sept. 4, 7 p.m.

Dunn grew up on Revere Road. “We would walk to Cain Park,” he remembered, “and ride our bikes there, go sledding there.” His father still lives in Cleveland Heights, but his mother died in 2011, “just before my music career took off,” Dunn said. “She was a big supporter.”

Dunn credits a few people from his school experience with contributing to his success. One is Glenn Brackens, his music teacher at Wiley. “There were so many people from his program who went on to do great things,” Dunn said. “He really conditioned us for [Heights High’s] A Cappella Choir. We were doing college-level pieces in middle school. I still keep in contact with him.”

At Heights High, Dunn was a member of the Choir, the Heights Singers and the Gospel Choir; the first two were directed by Craig McGaughey. “[McGaughey] really developed some good talent,” Dunn said. “He didn’t treat us like kids. That was the through-line from Glenn Brackens. We were already used to that level of criticism, if you will.”

Dunn also wrestled, coached by Larry Hoon. “Coach Hoon really believed in me,” Dunn said. "The discipline I learned in wrestling is something I took to every area of my life, and I attribute my success to that. Wrestling builds a certain amount of mental toughness and rigidity that team sports don’t really help you with because you’re depending on all these other people. Wrestling changed my life.”

He also is grateful for his guidance counselor. “My grades started slipping because I would cut classes and play the piano in the auditorium. Luckily, my counselor noticed and recommended that I take a career-prep class. So, I took Auto Collision Technology and brought my grades up enough that I could graduate. Thank God for guidance counselors.”

When Dunn was still living here, in 2010, a couple of projects fell apart. He was “in kind of a funk.” One Sunday night, a friend asked him to go to Nighttown. He didn’t feel like going, but decided at the last minute to go.

“There were just a few of us there,” Dunn recalled. “[Pianist] Jackie Warren was playing and she came over and said, ‘I know you’re a songwriter. This could be a great opportunity for you. Would you like to come up and play a song while Stevie’s here?’ So, I played a song I wrote and Stevie loved it. He and his band called me over to their table. Stevie told me, ‘Man, you really got it. Whatever you’re doing, as far as your writing process, don’t stop, cause it’s working for you.’ "

“I was so excited. I ran full speed up Delaware Drive, where my car was parked, and got a CD and ran back and gave it to Stevie. He said, ‘I’m gonna call you on Tuesday.’ Monday morning my phone got cut off. It didn’t get turned back on until Thursday. So, I don’t know if Stevie Wonder called or not.” They’ve met several times since then—though he has yet to tell Wonder the Nighttown story.

Dunn used to play his songs in his CH basement, and pretend he was a disc jockey announcing the record. “It never really occurred to me,” he said, "that one day I’d actually hear my song played after a Beyoncé song; or that I’d get to meet one of my idols, D’Angelo, and he would know me by my first name. And that I’d be blessed to tour with him, twice. It’s incredible to me. It’s just crazy.”

David Budin is a freelance writer for national and local publications, an author, and a professional musician and comedian.