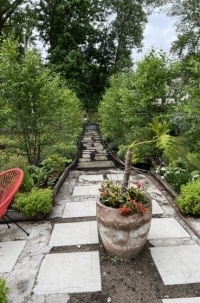 At first glance, two of the 40-plus gardens to be featured in this year's GardenWalk Cleveland Heights, July 16 and 17, seem quite different from one another.

Across the city, on North Park Boulevard, a relatively massive backyard presented the owners with both a challenge and an opportunity, because of its size. By focusing on small, managable sections, they installed a panoply of plants, integrating art and color into multiple intimate seating areas. They describe the result as “an experience of inspiration.”

Despite the apparent differences, a conversation with the four owner/gardeners revealed similarities. For example, all of them believe in working with nature, rather than against it, and all enjoy functional outdoor spaces with multiple seating areas, and water features. Their gardens, which they designed and planted themselves, are versatile enough to allow them to create, relax and entertain.

Interestingly, each of the gardeners described being inspired by birch trees.

The Northampton homeowners bought their house, in part, because of the imposing river birch that takes a prominent place in their backyard. In deciding how to create the rest of the garden, they took their cues from the birch, noting where its root system was and researching which plants would thrive in co-existence. Over time, they observed how and where to plant based on the position of the filtered sunlight. Now, myrtle, oakleaf hydrangeas, ornamental ginger, hellebore and other plants encircle the space.

When the owners bought it, the North Park home's massive backyard was filled with old, diseased trees and brush, and they spent several years clearing it. Inspired by the birch tree allee at Stan Hywet in Akron, they planted more than a dozen white river birch trees on each side of a lengthy stone walkway. In just four years, the trees have grown to form a canopied path that leads to a stone planter with a large mirror. Throughout the garden, they created intimate seating areas, with perennials and annuals displayed in pots and on walls.

GardenWalk Cleveland Heights is a free, self-guided tour that will take place from noon to 5 p.m. on Saturday, July 16, and Sunday, July 17. The map of participating gardens is on page 7 of the July Heights Observer, and can also be found online at gardenwalkclevelandheights.com.

Signs will be posted in front of this year's participating home and public gardens. For more information, visit the GardenWalk Cleveland Heights website, or send an e-mail to info@GardenWalkCH.com.

Judi Miles is a 26-year resident of Cleveland Heights who enjoys vegetable gardening. She is a little envious of gardeners who are able to create beautiful outdoor spaces.