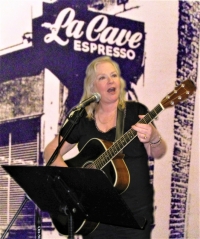 Gusti singing at the La Cave Reunion in 2010, in front of an enlarged photo of the entrance to the folk club La Cave, which closed in 1969. (Photo taken by and courtesy of Steve Traina)

The dean of Cleveland’s folk music community, Gusti Krauss—known by most only as Gusti—wrote in a March 21 Facebook post, “I am not dead! Still singing after all these years,” displaying her always irreverant sense of humor.

Then, in a sadly ironic twist, 10 days later, she died.

The rest of her March 21 message read: “I'll be singing a concert on May 14th for Folknet at Church of The Good Shepherd, 7-9 p.m. More news to follow!”

Well, more news did follow. Bad news. On April 1, her husband, Serge Krauss, wrote to her Facebook friends and followers, as part of a much longer post: “Today [Gusti] died at our pantry door of a fractured skull. She apparently fell from the back steps as she returned from a short, mid-day dental appointment, where she was so happy to finally get her new teeth back on track. She had been so happy that split second before eternity.”

The longtime Cleveland Heights resident had undergone treatment during the past few years for cancer, and she was returning to performing, an occupation she loved, after having been an important figure in Cleveland’s folk music scene for more than 60 years.

Gusti sang all her life, but started doing it professionally in the early 1960s, when she began performing at a Cleveland Heights club called the Rising Moon, later re-named Farragher’s. At that Taylor Road venue she met the New Wine Singers, a folk group who invited her to join them. She accepted, and they soon got hired to play in a folk club in Chicago, a gig that lasted 18 months.

When they returned to Cleveland, they split up. (A singer who replaced Gusti in the group for a short time was Elaine McFarlane, nicknamed Spanky, who, with one of the other members, started a new folk-rock group called Spanky and Our Gang, which scored several national hit records in the late ’60s.). After leaving the New Wine Singers, Gusti continued performing solo or as part of a duo, playing often at Farragher’s and at Cleveland’s main folk venue, La Cave, near University Circle, where I often heard her sing when I first started attending folk music shows.

Decades later, in 2010 I joined a committee that was putting together an event to commemorate La Cave, which had operated from 1962 to 1969. We met many times over several months, always at Gusti’s Cleveland Heights home.

The resulting “La Cave Reunion,” held over three nights at Wilbert’s in downtown Cleveland, featured nationally known artists who had appeared at La Cave, including Carolyn Hester, Josh White Jr., and Brewer and Shipley. The shows also featured a few local artists who had played there, including Gusti, who was long known for her booming voice. The committee who helped create the event was led by Steve Traina, who, for 20 years, has hosted a weekly radio show in Cleveland, "Steve’s Folk," delving into the history of folk and rock music. He’s currently writing a book about La Cave.

“Gusti was my first call when I began research for my upcoming book on La Cave. Naturally,” Traina said. “And it turned out to be one of the best calls. No one was more informative and entertaining, not to mention that her memory wasn’t the sieve the rest of our elderly memories are.”

Those of us who knew her and heard her sing and tell her stories have strong memories of her. For me, she was just about the last link to my musical roots here. And she was a mentor to many.

That May concert Gusti wrote about will still take place, but, of course, with a different look and sound and feeling than it would have had with Gusti performing. Charlie Mosbrook, the popular Cleveland Heights-based singer-songwriter, who performs around the country, is the current president of this region’s folk music organization, Folknet. Mosbrook told me, “Folknet was very much looking forward to presenting Gusti. She has been such an important voice in our community through the years. While we regret the loss of that opportunity, our hearts are filled with sadness for the loss of a friend to so many. We will celebrate her legacy in the Cleveland folk community.”

Steve Traina decided to call Gusti again, on March 30, “on a random whim, the day before she passed,” he said, “to follow up a question or two, and we chatted for 40 minutes. Or rather, she chatted for 40 minutes. She was always a storyteller, on or off stage. As hoped for, she had a half-dozen additional pithy quotes for the story, which in large part is her story. She reminded me that because she always made herself available to perform whenever La Cave had a hole in its schedule, [La Cave’s owner] Stan Kain thought of her as La Cave’s ‘house band.’ She was an appropriately named force of nature.”