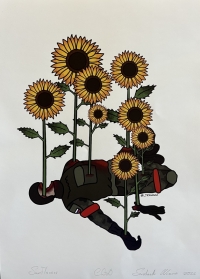 On Sunday, May 15, 2 to 5 p.m., Coventry PEACE Campus (CPC) will host an afternoon of art, music and food, all to benefit the artists of Ukraine.

The concept for the benefit grew from the 30-plus-year friendship between Susie Porter, of Euclid, and Serhiy Savchenko, a well-known Ukrainian artist in Lviv, Ukraine.

As the war ramped up, Serhiy's daughter, Ulianka, also an artist, began making digital artwork depicting the various aspects of the war, rendering the unbelievable events in her vibrant, and politically pointed, poster art.

After a conversation between Porter, Lynn Ischay, a former Plain Dealer photographer; and [the writer of this article], it was agreed that Ulianka would send copies of her poster art to be sold here, to raise money for victims of the war in Ukraine.

In 2017, Serhiy Savchenko opened a gallery and studio in Gdansk, a city just over the border in Poland. Gdansk has now become a refugee center for Ukrainians fleeing the war. During the pandemic, Serhiy created a nonprofit foundation to help artists endure during trying times. Now, the foundation is helping the war effort as well, by collecting items for citizen soldiers and volunteer organizations (https://savchenkogallery.com/en/save-ukraine-win-together-2/).

The May 15 afternoon event will showcase 13 of Ulianka's poster multiples, all for sale. Ulianka (in Gdansk) and her father, Serhiy (in Lviv), both talented musicians, will Zoom in to CPC and perform a song or two that Ulianka recently wrote about the war. Supportive artists from near and far will also offer their art for sale, to raise funds for Ukraine. Lisa Kenyon (Studio Foundry) is contributing a bronze piece, David Childers of North Carolina has promised a painting, and Maria Dabrowski of the Netherlands is donating a series of her photography books.

Community members are invited to support the fundraising effort while enjoying an afternoon of music by local musicians, snacks, and the chance to go home with a print by an up-and-coming Ukrainian artist.

Admission to this special event is $5 per person; those 17 and younger will be admitted for free.

Robin VanLear is a member of Artful at Coventry PEACE Campus. She is the former creator and director of Community Arts at the Cleveland Museum of Art, and Parade the Circle.