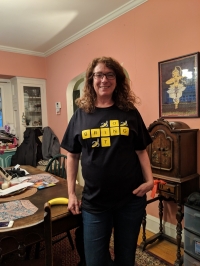 In 2013, a group gathered at the home of Cynthia Larsen, co-director of Lake Erie Ink (LEI), to test a new game: Giant Bananagrams. It’s a game of nerves, wit and teamwork that appeals to word lovers everywhere. Later that year, the game made its debut as a fundraiser for LEI—a massive competitive tournament for both adults and youths, played on a 30-by-30-foot board. Since then, the Giant Bananagrams fundraiser has become an enduring tradition for LEI, drawing teams of word-game enthusiasts.

The fundraising tournament returns April 29 and 30, to spread the joy of wordplay and support writing programs for young people in our community.

LEI has also expanded the many ways people can get involved, including setting up a peer-to-peer fundraising page in support of the nonprofit, or a story hour hosted by Dana Norris, founder of Story Club Cleveland.

From poetry-printing workshops to published anthologies, LEI creates meaningful opportunities for youth to find the right words to express themselves. The Giant Bananagrams fundraiser helps to further that mission. Visit https://givebutter.com/gb2022 for more information, to set up your own LEI fundraising page, or sign up for one of the limited Giant Bananagrams slots.

Eli Millette works as the communications and outreach director at Lake Erie Ink. He lives in Cleveland Heights.