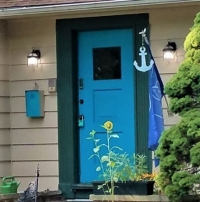 Cleveland Heights has more colorful painted doors than anywhere else in this region.

That’s not a scientific fact. And I don’t know if it’s really true. But I’m sure it is. I mean, I drive all around everywhere and I don’t see anywhere near the number, or percentage, of houses and apartment buildings with colorful front and/or side and/or back doors as I do here in Cleveland Heights.

When I was growing up here, I didn’t see quite as many. I think the number was actually zero. When my wife and I moved into the house we live in now, in 1986, we painted our front door purple. I think most of our neighbors didn’t like it. Most of them refused to acknowledge it at all. Only a few people complimented us on it.

When we’d talk to neighbors at our annual block party, and they’d ask which house was ours, we’d tell them the address, which rarely registers with anyone, and then we’d say, “The one with the purple door and shutters,” and they’d say, “Ohhhh – that house,” but not in a particularly happy way.

I was still walking quite a bit back in those days, mainly with our kids—pushing them in strollers and, later, walking them to playgrounds, restaurants, and other places. I saw very few painted doors. And the ones I did see usually had nutty looking older women tending front-yard flower gardens—also not nearly as plentiful then—with a bunch of cats walking, running, pouncing, sleeping and rolling around.

I stopped walking for many years, until the pandemic started, two years ago. Then, that spring, I started walking every day (until the following winter—then the same pattern this year). One thing that kept me walking was being able to take pictures while walking. That became my main motivation—taking pictures and posting the best ones on Facebook.

It started with flowers, which are now in the majority of Cleveland Heights yards, in various forms, and myriad varieties. Then I noticed how many stone houses there are, especially in my part—the southwest corner—of the city; between North Park Boulevard to the south and Mayfield Road to the north, and Overlook Road to the west to around Coventry to the east, plus the Ambler Heights neighborhood at the extreme western edge. I looked up the history of this section of the city, which was the original part of what became Cleveland Heights, to understand all that stone.

Then I noticed how many public benches there are in Cleveland Heights. I ran into former Cleveland Heights City Manager Bob Downey on one of my walks (well, maybe I should say I walked into him, because I make a point of not running, ever), and I mentioned to him about the benches. He explained to me that this was no accident; that the city placed them in as many locations as it could. I explained to him that my new slogan had become: “I shall leave no bench un-sat-in.”

And I noticed how many stone walls, high and low, exist all over Cleveland Heights. And the variety of architectural styles of the houses and buildings here. And the streams that run through Cleveland Heights. And how some little areas—sometimes just a couple of buildings and a courtyard in between—remind me of New York City. And then I started seeing all the doors, painted in many colors.

I took pictures of all those things. I posted many of them. But I started amassing so many that I decided to sort them and post pictures of flowers one day, walls another, benches a few times, sidewalk art, and so on. And in those first two years, I posted, maybe, five groups of 15 painted-door pictures each. I have a growing list of new ones to photograph when the weather gets nicer and when there is grass on the ground and leaves on the trees again.

But how and when and why did that happen—the colorful door thing?

The stone houses and walls, and the architecture, and the streams and other things all have their histories. And gardening has really grown in popularity over the past two or three decades, so that’s no surprise. But what about all the painted doors?

Did my wife and I start that? I doubt it; no one even liked it when we did it. And, ironically, we got a new door a few years ago, and didn’t paint it.

I guess it’s just another natural byproduct of Cleveland Heights becoming “Home to the Arts.” That’s been the city’s slogan for a while. This is a community with a super-high concentration of visual artists and craftspeople, musicians, writers, actors and other theater professionals, dancers and choreographers, and other artists and many arts organizations. Maybe it’s just as simple as that.