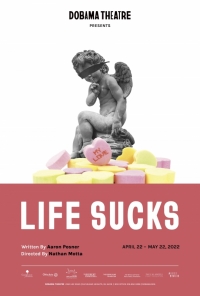 Dobama Theatre will end its 2021–22 season with the award-winning comedy "Life Sucks," by Aaron Posner. This contemporary reworking of Chekov’s classic "Uncle Vanya" won the Off-Broadway Alliance’s Best New Play of 2020. Dobama audiences may remember Posner’s adaptation of Chekhov’s "The Seagull"—"Stupid F*cking Bird"—which came to roost at Dobama in 2019.

Chekhov’s themes of love, longing, and ennui are at the heart of this story, but Posner also highlights the humor and wit of his characters. In the play, Sonia and her Uncle Vanya are visited by her estranged father and his third wife, Ella. Their large house is also home to Babs and Pickles, and frequented by Vanya’s longtime friend, Dr. Aster. Rivalries and love triangles simmer among these passionate people, and tensions brew as personalities clash.

The frustrations of being cooped up with strong personalities will be familiar to today’s audiences. “'Life Sucks' feels very pandemic-y,” Posner said. “Chekhov has a great quote about how any idiot can withstand a crisis. It’s the day-to-day living that wears us out. Maybe that’s never felt truer than these last couple years.”

Critics have lauded the play, with the Chicago Sun Times writing, “'Life Sucks' is altogether wise, profoundly humane, hilarious, quirky, endearing and, in countless clever ways, brilliantly faithful to its source . . . Posner has managed to find his own voice in the process, bringing a playful, far from cynical, fourth-wall-piercing originality to the story.” Jesse Green of The New York Times wrote, "Aaron Posner’s bitingly funny and unexpectedly touching play . . . [has] no date stamp on feeling stranded between regrets and hopes, between fancy dreams and the banality of existence."

Posner is a Helen Hayes and Barrymore Award-winning director, former artistic director of New Jersey’s Two River Theatre, and founding artistic director of Philadelphia's Arden Theatre. He has directed more than 150 productions at major regional theaters throughout the country, including in the D.C. area, where he teaches at American University.