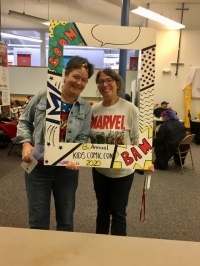 In 2013, shortly after Lake Erie Ink (LEI) opened its doors, cofounders Cynthia Larsen and Amy Rosenbluth set out to build a new creative expression community for youth. They knew Cleveland’s young people loved the rich comic culture in Northeast Ohio, and enjoyed creating their own comics.

What if the robust comic talent in Cleveland could work directly with the next generation of comic creators? Several phone calls later, the LEI Kids’ Comic Con was scheduled, featuring workshops by Marc Sumerak, Derf Backderf, Martinez E-B, Karen Sandstrom, and more.

This year, as the Kids’ Comic Con celebrates its 10th birthday, Larsen reflects on its growth: “When we started, we had like 40 kids . . . not as many workshops, not as many artists. We pretty quickly doubled the number of kids participating in Comic Con.”

Many of these kids found their voice through the comic workshops. “I was never confident in speaking to begin with, so expressing stuff by drawing and writing is better for me,” said Charlotte, a fifth-grader.

As the event grew in size and popularity, so did the number of local artists who participate. As artist/teacher Gary Dumm explained, “I enjoy encouraging young artists, and wish that I'd had more encouragement when I was young.”

This year, the Comic Con will incorporate both in-person and virtual events. “I’m most excited that we get to keep the best part of being in-person, but also get to have Justin Reynolds, Liz Montague, and Nickelodeon Studios be part of the event,” Larsen explained. “It’s the best of local artists, with new excitement and new people.”

With over 20 workshops led by professionals in the field, including Terri Libenson and Juan J. Fernandez, the 10th Annual Kids’ Comic Con builds the Cleveland comic community one panel at a time.

Eli Millette is the communications and outreach director at Lake Erie Ink. He lives in Cleveland Heights.