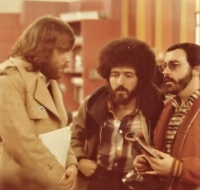 Bill Ryan (Willio), Phil Baron (Phillio) and David Budin in Tommy's on the restaurant's final day in its original location on Coventry Road in 1978.

These four guys walk into this little Cleveland Heights recording studio where I’m working in the autumn of 1967, and they record about six of the most unusual—in a good way—rock songs I’ve ever heard. Then, a couple of months later, I leave for New York City, get myself into a rock band, and start playing around that area.

A few months after that, in between music projects, I’m homeless in NYC, walking around midtown one night and I run into those four guys. They’re in the city to record an album for Epic Records, which had signed them, based on those demos we recorded in Cleveland Heights.

Meeting up with them kind of saves my life, but to spare you a bunch of pathetic stories that typify life in the music business, let’s say that three years later, we’re all back in Cleveland. I start hanging out with one of those guys, Bill Ryan, a singer, songwriter, joke writer and cartoonist.

We start eating a lot of meals at Tommy’s, the first summer Tom Fello has his restaurant, which, at this time, still consists of seven stools at a lunch counter in the back of Ace Drugs on Coventry Road.

Bill learns that, through a connection, he can get us on WMMS-FM’s “Coffee Break Concert,” a popular weekly hour-long live broadcast on one of the top-rated rock radio stations in the country. There’s normally a months-long wait, but Bill has this connection who schedules us in for one week later.

The night before the show we meet at my apartment on Euclid Heights Boulevard and put together an hour’s worth of comedy material for the show. We tell the show’s host, Matt the Cat, that we’re country singers from England (though we don’t bother with accents), named Luke Warm and Farron Mild. The broadcast is weird, but WMMS’s receptionist tells us it has stirred up some reaction, mostly positive, from listeners.

We decide to turn this into a regular comedy-music duo. Though I soon realize I can’t do this and my rock band at the same time, so I decide to concentrate on the music. But I recommend Phil Baron to take my place. He does, and they call the act Willio & Phillio.

They play all the major venues in the area, get a morning-drive-time radio show on WBBG-AM, do a weekly slot on the TV show "PM Magazine" on WJW-TV (using our crazy Cleveland Heights house as their onscreen headquarters), and release a record album. And I continue to write and perform bits with them, until Willio & Phillio move to Los Angeles in 1980.

They both become successful—first writing songs and doing voices for Disney Channel kids shows, and then doing voices for everything. In the ’80s, Phil does the voice for the talking, singing toy bear Teddy Ruxpin, and Bill is Teddy’s friend Grubby. From the ’80s on, Bill, now known to the world as Will, is one of the top voice artists in the world, doing voices in thousands of animated features, cartoons and other movies, and TV and radio shows. In the early 2000s, Bill launches a 1930s-style animated web series called “Elmo Aardvark,” and more recently creates and stars in a series of short 1940s-style movie comedies called "The Adventures of Biffle and Shooster", while recording and performing around LA with his cowboy band.

Bill and Phil, after breaking up the comedy duo, continue to do many projects together, and we all remain friends to this day. Except, well . . . not exactly, because Bill, diagnosed with cancer this past September, dies, right before Thanksgiving. But we can see him and hear him in all the work he left us.