What am I, chopped liver? Maybe 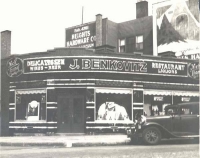 This was the restaurant everyone called Benky's, in 1938, about 20 years before it became Irv's. The building, constucted in 1923, still stands, though the delis are long gone. [photo courtesy the Cleveland Heights Historical Society]

I mentioned here, once, long ago, a part of a conversation I had with my father when I was in 10th grade at Heights High. I was eating dinner with him at Irv’s deli on Coventry Road. That was unusual on at least a couple of levels: First, by that age, I rarely did anything with my father, especially including talking. Also, it was shortly before the era when Irv’s changed from a bona fide restaurant, a family place, to a hangout for hippies, a clubhouse for misfits. I spent a lot of time there then, too—often in deep discussion, but not with my father.

And a decade after that, I was sitting with some people in the Stage Deli, also in Manhattan, and I noticed that a corned beef sandwich cost $15. So, I told them the above story.

Today, at Katz’s, on Manhattan’s Lower East Side—probably the oldest and best-known deli in New York City—you can get a basic corned beef sandwich for $23.95. On the restaurant’s online menu, if you also click the “extra lean,” “deli rye” and “mustard” options, the price sails to $27.95. And then, tacking on all seven available extras (Swiss cheese, tomato, lettuce, etc.) you’ll add almost another $6. That would bring the total to about $34. If you add potato salad, that’s another $6.95.

A side of chopped liver? Don’t ask. Okay—it’s $11.45. I’m sure it’s very good. And I would definitely eat some right now. But, I mean, $11.45? That’s about the price of three large bags of Doritos. And there was a time in the late ’60s, crashing at apartments around Coventry, when a large bag of Doritos would keep me alive for three days. I would have accepted donations of chopped liver then, too, having grown up with it and liking it.

When I was a kid in the 1950s, living upstairs from my father’s aunt in an up-and-down duplex on Belmar Road, my great-aunt used to make chopped liver every Friday for Shabbat dinner for her family. She’d start at about 6:30 a.m., with the strong odors of frying onions and liver permeating our kitchen, where I was trying to eat a bowl of Frosted Flakes, reading the Plain Dealer comics section, and listening to my great-aunt chopping and chopping and chopping with her rounded, four-blade chopper in her old wooden bowl.

At that time of day, at that age, chopped liver seemed completely disgusting (and I know that it still does to many people, at any time, of any age). But I would order it at delis—like Benky’s (and later Irv’s) on Coventry; or Solomon’s, and Corky and Lenny’s, at Cedar Center; or Budin’s on Chagrin Boulevard in Shaker Heights—when my parents took me.

And speaking of Benky’s and Budin’s, at the time Benky’s was open, Budin’s was selling corned beef on Coventry, too. Budin’s became better known when my great-aunt (the one who lived downstairs) and her husband, my grandfather’s brother, moved it from Coventry to Shaker Heights, and it evolved into a sit-down restaurant, where Paul Newman worked as a busboy.

My father tried to work there for a while, too, when I was a kid and he was working his way through school, on his way to becoming a college English and speech teacher. He had gone to college briefly, but when World War II broke out, he enlisted in the Navy—to avoid getting drafted into the Army, because he didn’t like to walk. That’s one of the few things we agreed on.

And that’s another thing that made our conversation at Irv’s unusual—that we agreed on a major point I was making. I proposed that it would make more sense for me to quit school right then, than to waste my time in school, which I was obviously doing, when I could, instead, be working on what I knew was going to be my career, music. To my shock, he agreed. But he pointed out that it was not feasible, legally.

I remember the corned beef and chopped liver sandwich I had that night. I remember the way Irv’s looked that night, and also the way it looked a couple of years later. And I remember everything about that conversation with my father.