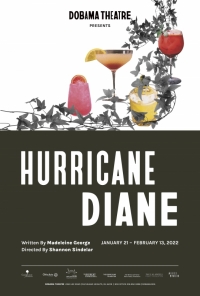 Dobama Theatre’s 2021–22 Mainstage season continues with the Cleveland premiere of the 2019 Obie Award-winner "Hurricane Diane." The play, by Pulitzer finalist Madeleine George, will run from Jan. 21 through Feb. 13.

The Diane of the title is a permaculture gardener with supernatural abilities. Owing to her true identity—the Greek god Dionysus—she has returned to the modern world to gather mortal followers to restore the earth to its natural state. Where better to begin than by seducing four housewives in a suburban New Jersey cul-de-sac?

In this award-winning comedy with a twist, George pens a hilarious evisceration of the “blind eye” we all turn to climate change, and the impending storm of catharsis that awaits us all, even in our own backyards.

"Hurricane Diane" was written with "The Bacchae" in mind. In "Bacchae," an ancient Greek tragedy by Euripides, Dionysus (the god of wine, song, revelry, and fertility) returns to Thebes to seek revenge on the city’s leader for forbidding his people to worship Dionysus. The god whips the women of Thebes into a frenzy, and they eventually kill their leader. Through the millennia, "Bacchae" has become symbolic of female empowerment, the fluidity of gender, and the inevitable price of vanity. It is also, surprisingly, played for laughs.

By writing the play in the style of Greek comedy, George finds ways to mine both the humanity and the inevitability of climate change. Her characters grapple with questions that seem both urgent and unanswerable: What can I do to stop this? And what can I do if I fail?

New York critics regarded the play as a hilarious and biting look into the world of suburbia, creature comforts, and the crisis of American individualism that defiantly rejects change.

"Hurricane Diane" lays bare the critical mass of buy-in it will take to manage the climate crisis—through a string of humorous sitcom scenes, audiences are able to peer into the housewives’ heads one-by-one, begging the question of whether climate change is truly fated or if the crisis of human nature produced the impending “hurricane.”

Performances are Thursday, Friday and Saturday evenings, and Sunday afternoons. For a complete schedule, ticket prices, and reservations, call the Dobama Theatre box office at 216-932-3396. Ask about reduced prices for RUSH tickets (available before curtain time), and the "pay-as-you-can" performance on Jan. 23, at 7:30 pm.

Nathaniel Motta is the artistic director at Dobama Theatre.