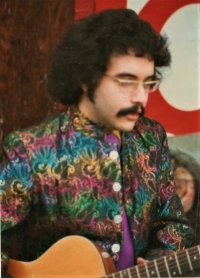 This was one year after leaving Heights High. This guy would not have been allowed to go to that school (which would have been fine).

Heights High was overcrowded when I attended classes there—3,000 kids in just three grades cramming into the hallways and everywhere. That was one problem. Another was that in the mid-to-late ’60s the administrators were still clinging desperately to the institutions of the 1940s and ’50s. It was an era of great change in terms of such things as the concept of free speech. And in free expression, which included clothing and hair styles, music and other arts. The school’s administration was pretty repressive to begin with, but that magnified mightily with its reaction to the new thinking that swept into society in the mid-’60s.

The school still employed a ridiculously strict, detailed and long-winded dress code. No pants for girls, skirts and dresses had to come to a girl’s knees or lower (often demonstrated by a girl having to kneel on the floor to prove that the hem of her skirt went all the way down), no shorts for anyone, no T-shirts for anyone, no jeans, boys’ shirts had to have a collar, leather shoes only (no “gym” shoes, except in gym class, where they were the only shoes permitted).

The list went on and on. As for boys’ hair—even in that era of the Beatles’ massive popularity, and the resultant look of all their contemporary copycat pop and rock artists, and that of much of the population of the free world—it was not allowed to touch your collar in the back, or your ears on the sides, among other rules (like no Mohawk cuts). And no facial hair.

One day I was walking in the jammed main corridor when my unit principal called my name. “What now?” I muttered. He yelled, “What’s the matter, can’t you afford a haircut?” My hair was not long, by the way. I said, “No.” He said, “Here,” pulling $2 out of his pocket. “Don’t come back till you get your hair cut.”

I took the money and went across the street to Wally’s Pool Hall, beneath the Cedar Lee Theatre, and played pool till the $2 ran out. I brushed my hair back on the sides and up in the back and returned just before the end of the last period. The principal never said anything about it.

But he said a lot of other things. Enough to push me over the line about quitting school, which I did, as soon as I turned 18. I always wanted to quit school, long before I ever met that principal, but he made me count the days until I could. He certainly wasn’t the only one there who was stuck in an earlier time period, though he seemed crueler than most of the others. (I had an English teacher, who had also been my mother’s teacher there, and before I even said anything to her about him, other than his name, she remembered him as “sadistic.” And he was.)

Early in high school, I and three other guys from my class made plans to run away. One of our parents discovered our plan, so we abandoned that idea. Two of the guys took off later and made it to Hawaii, where they got jobs and an apartment. They were found and dragged back here. One of them quit school and the other’s family moved away and enrolled him in a different school.

Another friend, after getting yelled at a million times by our mutual unit principal, got called in to the office for having hair that was too long. As usual, the guy told my friend not to come back till he got his hair cut. That was in 1966. He hasn’t been back since.

Yet another friend grew weary of that whole experience and did get his hair cut—super short—after quitting school and joining the Army.

I turned 18 in late May of my class’s senior year. I didn’t have enough credits to graduate, and there was no way I was coming back to school—not that school, anyway—so, shortly after my birthday, and after all Heights Choir activities were finished, I quit school, too. And I grew my hair as long as I wanted, wore what I wanted and did what I wanted, which was, mainly, playing and writing music. A few months later I was living in New York City and working in the music business.

They got rid of all of us, and a lot of other scalawags. And, I guess ironically, out of school, we wound up reading more books than we would have in.

The school dropped that dress code a year or two later. And by the time my kids went to Heights High, in the '90s, the administrators and counselors there were much more interested in actually helping kids than just acting like their prison guards and wardens. Somebody learned something.