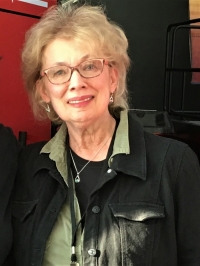 Janice Mitchell in recent times, at the Rock Hall, far from Liverpool.

This girl, Janice, and I watched the Beatles’ American debut on "The Ed Sullivan Show," on Feb. 9, 1964. We were on Belmar Road in Cleveland Heights. I mean, we weren’t together in the same place—we were watching the show in our own houses, both on Belmar.

I didn’t really know Janice. She was a year older than I, and she hadn’t been living on Belmar very long. But my friend Phil down the street talked about Janice all the time. He had a big crush on her. I’d met her and, through hearing about her from Phil, I was beginning to feel a little like I knew her.

She seemed quiet, unassuming, maybe kind of shy, not very outgoing, kind of reserved. She didn’t seem to leave her house much, except to go to school. One day, Phil mentioned that she had tickets for the Beatles’ first Cleveland concert, coming up in September 1964 at Public Hall. I was surprised and impressed.

I didn’t attend that Beatles concert, but a couple of days after that event, I read in one of the Cleveland newspapers that two American girls had run away, probably to England, supposedly to meet the Beatles. Then I read that the girls were both Heights High students. And then I read that one of them lived on my street, Belmar, and that her name was Janice Hawkins.

“Yeah,” Phil said, “that’s the one. The one who went to England. That’s what you’re asking, right?”

Her story became international news. A few weeks later, I heard that they did find her. And they did make her come back. I really wanted to talk to her. I had a lot of questions. I also wanted to tell her I admired her for doing that. And then I got that chance—57 years later.

A few weeks ago, in September, I read that Janice Mitchell was going to be speaking at the Music Box in Cleveland. I looked her up. She moved back to Cleveland a few years ago, and she wrote a book about her experience that was recently published by Cleveland’s Gray & Company, Publishers. Mitchell hasn’t really talked about that England thing since it happened, until relatively recently.

I contacted her and told her that I had lived on her street at the time of her big adventure, and that I had always admired her for that, and we started an online conversation—about Belmar, Phil (who died long ago), shopping on Coventry Road, and other things, including her new book.

In Mitchell’s book, My Ticket to Ride: How I Ran Away to England to Meet the Beatles and Got Rock and Roll Banned in Cleveland (A True Story from 1964), she provides her account of that England trip and more—all that had led up to it, and what happened to her in its aftermath. I’m not going to tell that story here, because she tells it there, and if you’re interested in it, you can read it. And I recommend it, whether you were around at that time or not. It’s not only her personal story, it paints a picture of that era, with a lot about Cleveland Heights at the time.

She did return to Cleveland Heights, and Heights High, after her adventure, but she left the next year to finish high school in Columbus. Then she stayed in Columbus, worked as a reporter for The Columbus Dispatch, got married, and moved to New York City, where she worked, first, as a magazine writer, and then, through a series of related moves, as a private investigator for clients, including several well-known international corporations.

On the morning of Sept. 11, 2001, as she headed to work in the Financial District, getting off the ferry from her home on Staten Island, she saw the first plane hit the World Trade Center. Not knowing what had really happened, she continued, she told me, until “the second plane flew low, loud and wobbly over my head and went right into the second tower. Had I taken an earlier ferry—10 minutes earlier—I would have been coming up the subway stop into the WTC.”

Like many New Yorkers in the months after 9/11, she developed PTSD, and, after a visit with her brother in Shaker Heights, she decided to move back here. She first bought a house in University Heights, but has since settled into a condo in Bratenahl, where, she said, she has “an unobstructed view of the lake and the downtown skyline.”

Her story—the one from 1964—is a part of Cleveland Heights history. An odd one, maybe, but a cool one.