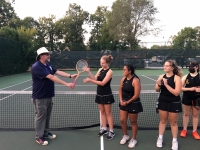 This year’s matchup took place at Purvis Park, on Sept. 27, with the Heights High Tigers beating the Beaumont Blue Streaks, 3-2.

The trophy, a tennis racquet painted gold, went home with the Tigers and will stay with them until the teams meet again next year.

The team victory came down to the first doubles match that, after two solid hours of play, had entered its third set. With darkness becoming a factor, the Heights High team of Josie Naypanner and Leslie Villeda pulled out a thrilling third-set victory (7-5), giving Heights High the win for only the third time in the 10-year existence of the golden racquet.

University Heights Mayor Michael Dylan Brennan was in attendance, and awarded the golden racquet to the Tigers and the team’s head coach, John Laskarides.

Nicole Levine is Mike Pellechia's daughter, and an avid tennis lover. She earned a bachelor's degree from Ohio University's E.W. Scripps School of Journalism, and currently resides in Columbus.