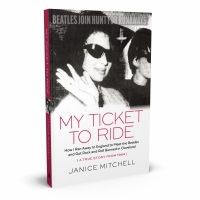 Cleveland Heights was at the center of one of the most unusual Beatles fan stories ever, although few people remember it today.

In September 1964, two 16-year-old Heights girls became international news for weeks when they ran away to London, England, in search of the Beatles. Eventually apprehended and returned for a public punishment, they never spoke of their adventure again. Until now.

Janice Mitchell tells her story in a new book, My Ticket to Ride: How I Ran Away to England to Meet the Beatles and Got Rock and Roll Banned in Cleveland. It’s a vivid, firsthand account of the early days of Beatlemania.

Growing up in an unhappy foster home in Cleveland Heights, Mitchell discovered R&B music by borrowing records from the Coventry library. Then, in December 1963, while doing homework in her duplex's small kitchen, she heard the first Beatles song broadcast on Cleveland radio, “I Want to Hold Your Hand,” and fell instantly in love.

“Everything about the Beatles transported me into another world,” she writes, “a world that I wanted to be part of.”

Like many other fans, she sought anything related to the band: Beatles magazines and trading cards at stores on Coventry Road; Beatles records at Disc Records in the newly opened Severance Center; the Beatles movie, "A Hard Day's Night," at the Colony Theater at Shaker Square. She camped overnight on the street to get front-row tickets to the Beatles' Sept. 15 concert at Cleveland's Public Hall.

The day after the concert, she and her best friend ran away to start a new life in “Beatleland.” They flew from Cleveland Hopkins Airport to New York's JFK to London. There, the two girls rented a flat, visited hip music clubs in Soho (described in those Beatles magazines), strolled fashionable Carnaby Street, and met nice English boys.

They had planned carefully, but made one mistake: They assumed no one would look for them. Thanks to the combined efforts of Cleveland Heights police, the U.S. State Department, and London Metropolitan Police, a hunt was on.

Mitchell's tale alternates between sweet and bittersweet, as she discovers how threatened adult society was, in 1964, by young women exercising control over their lives.

My Ticket to Ride is available at Mac’s Backs-Books on Coventry. Mitchell will talk about the book in a virtual event organized by Heights Libraries on Oct. 20, at 7 p.m. The event is free, but registration is required.