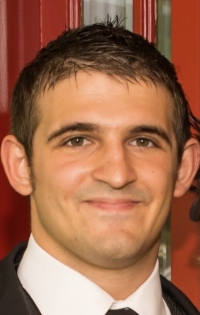 “This group is like the pieces of a puzzle coming together—they bring years of experience in top-notch organizational leadership, teaching, communication, technology, coaching, and more,” said Superintendent Elizabeth Kirby. “Most importantly, these individuals have a passion for providing a high-quality education to each and every student, helping them grow into young adults ready for college and career.”

Smith served the Brooklyn City School District (BCS) as the technology coordinator (2016–21), implementing professional development and technology integration across the district. Smith also was dean of students for BCS (2019–20). In that role, Smith instituted Positive Behavioral Interventions and Supports (PBIS) for the student body, and worked with teacher teams across grade levels.

Prior to working for BCS, Smith was a social studies teacher at Lake Catholic High School and a high school wrestling coach.

“I am really looking forward to working with students to help them become the best version of themselves that they can be,” said Smith.

A former science teacher, and an assistant principal in the Cleveland Metropolitan School District (CMSD), Towns joins Tiger Nation excited to work with students and staff.

“I am a people person. I love meeting new people and building relationships with the ones that I already know. I am ecstatic about the opportunity to add value to such a phenomenal community,” said Towns.

Towns was also a CMSD curriculum and instruction specialist (2016–18), and a 2012 Woodrow Wilson Ohio Teaching Fellow. He is currently pursuing his Ph.D. in urban education at Cleveland State University (CSU).

Lawson-McKinnie has served the district as an administrator for eight years, and has been instrumental in expanding Heights High’s Advanced Placement, College Credit Plus, and former Early College programs.

“I am honored to be chosen to lead Heights High in the upcoming year,” said Lawson-McKinnie. “It’s a pivotal moment in time for our students, and I look forward to working with my colleagues to provide them with the support and guidance they need to succeed.”

Lawson-McKinnie formerly worked as a high school principal in the Columbus Public Schools District (CPS) and CMSD. She earned her doctorate at CSU.

Dubsky joined the principal team at Heights High in 2020, after two years as Heights High’s dean of students. He first came to CH-UH in 2009 as a physical education teacher at Oxford Elementary School.

Asked what he loves about his work, Dubsky said, “I like that I get to work with an entire grade level and get to know all of the students.”

Prior to working in education, Dubsky was a strength and conditioning coach with the Cleveland Indians, Texas Rangers, and an NFL Combine training group.

Fullerman joined the Heights High administration team in 2015. He previously was principal of Summit Academy Secondary School in Canton, where he also was head coach of the basketball team. Prior to entering the education field, initially as a teacher, he served as a Cleveland Heights police officer (2003–09).

“My favorite thing about Heights High is the students,” said Fullerman. “Greeting them as they enter the building, talking to them in the halls and eating lunch with them are some of my favorite parts of the day.”

Fullerman was named the CH-UH Administrator of the Year for 2021.