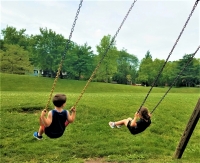 You can’t really see it, but one of the houses my father grew up in is just out of view in the picture of two kids swinging at Coventry PEACE Park this summer. The house is technically in the upper left corner. Some of it might be visible, if not for a tree or large bush in front. It’s a few houses back from the Coventry library, on Washington Boulevard.

My father moved there with his family when he was about 4 years old. The next year he started kindergarten at Coventry school, right across the street, the site of the PEACE Park now. My father went all the way through Coventry school, Roosevelt Junior High and Heights High, as I and my brothers did, and as my kids did. (Well, our younger brother went almost all the way through Roosevelt, but they tore the building down when he was halfway through ninth grade. Though they let him get out first. Of course.)

So, the year my father started attending Coventry school, 1925, was the same year the Coventry library was built. It’s still standing and still in use. And, amazingly, it still has the exact same distinctive smell that it did when I started using it, when I was about 4.

My mother started working there when I was in second grade, as secretary to the head of the library system, Miss Lynch. I remember her name because of the time my mother told someone on the phone, “I’m sorry, Miss Lunch is out to lynch.”

At lunch time, when I was in elementary school, I would walk over to the library and my mother would give me some money—maybe 30 cents—and I would walk to either Merit Drug, right across the street, or Coventry Drugs, at Coventry and Mayfield, for a cream cheese and jelly sandwich or a hot dog (probably 15 cents), and a drink (probably 10 cents). And then I’d splurge with the extra nickel on a pack of baseball cards or Bonomo’s Turkish Taffy.

My mother lived on Coventry when she went to Roosevelt and Heights. She was still in junior high when she first met my father and they started dating, and never dated anyone else (until after my father died). When they were in high school, my mother worked at a dentist’s office above Coventry Drugs. (The term “Coventry drugs” would take on a new meaning in the 1960s, when I hung out there, but that’s a different story.) My father worked at the fish market halfway up Coventry, where the original Big Fun started out.

During the Depression, my father’s family had to move out of the big house on Washington, and they moved a few times, but always stayed in that neighborhood. They lived in a house on Coventry, north of Mayfield (a few yards from where my father is buried). They lived in one of the two apartment buildings on Mayfield at Coventry, where, 20 years later, I would ride the elevators up and down during the time I subbed for a kid on his Plain Dealer route. And they lived on Belmar, two blocks east of Coventry.

During World War II, my father served in the Navy and my mother rode a train out to California, where he was stationed (in between trips to the Philippines on a troop transport ship) to get married. After the war, they returned to Cleveland Heights and lived in a house on Belmar, where I spent my whole childhood. We lived in one house for my first 15 years and then moved next door, where my parents continued to live long after I left home at 18.

My daughter-in-law teaches at Heights High and my son coaches there. And when my grandchildren—those kids on the swings—go to Heights High, they’ll be the fourth generation at that school.

The chicken wire is long gone from the house on the right. When we were kids, my mother installed chicken wire around the entire upstairs porch, assuming, I guess, that we were planning to walk along the railing. It never really occurred to me to do that, but, I don’t know—some other kid might have wanted to.

The other thing I notice is that when I lived in those houses, there was a big maple tree in the front yard of the house on the right, and no trees in front of the other house.

Things do change around here, but pretty slowly.