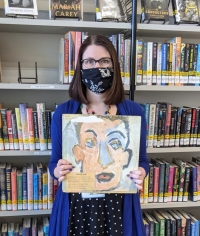 Sara Phillips, manager of the University Heights branch of Heights Libraries, was having a routine day when an oddly shaped package arrived.

“I got a package in the mail from San Francisco that was record-shaped and—lo and behold!—it contained a record from our collection that was due back in June 1973!” said Phillips.

In 1973, when he was in eighth grade at Wiley Middle School, Howard Simon checked out Self Portrait by Bob Dylan. He recently found the record mixed in with his personal collection, sandwiched between two other Bob Dylan albums, Nashville Skyline and New Morning.

Simon included a letter with the overdue vinyl, and Phillips shared it with the library’s communications department.

“As a recent retiree, I am taking the opportunity to turn my attention to some of the many vignettes of life that, by dint of career and family, have been neglected these many years,” Simon wrote. “In that context, I am returning with this letter an overdue item (by my count, approximately 17,480 days overdue as of this writing). . . . It’s quite late, and I’m quite sorry!”

Simon’s letter goes on to explain that the record “isn’t in great shape,” and partly blames his nomadic life for its condition: “This particular album has moved with me (in succession) from University Heights to Chicago, Santa Fe, Los Angeles, Berkeley, back to Chicago, back to Berkeley, again to Chicago, Sacramento, and finally San Francisco. I’m pleased it’s survived at all.”

Not only did Simon return the album, he made up for all the years he deprived the Heights community of Dylan’s Self Portrait with two donations.

The first was a “replacement fee” in the amount of $175 (“. . . a tithe, if you will . . .”), most of which serves as a generous donation to the library as, according to Phillips, “The album sleeve is in rough shape, but the records themselves are in great shape.”

The second was a copy of one of Simon’s own albums, Western Reserve. It turns out that Simon is a musician in his own right, with several albums under his belt—no doubt inspired by Bob Dylan. Phillips sent the album on to the library’s technical services department, to see about including it in the library’s music collection.

“The funny thing about this is that we don’t charge overdue fines anymore,” said Phillips with a laugh. “As long as we get the item back, we see no need to penalize people. We’re grateful that Mr. Simon returned the record. I’d said we can now call it even.”