The shoppe on the corner 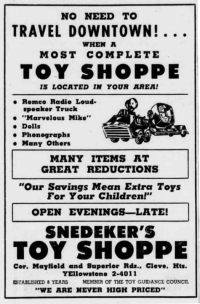 My birthday is in May, and I’m thinking of one birthday in particular—my fourth. On that day, my uncle happened to be visiting his mother, my great aunt, who lived downstairs from my family, in the duplex she owned on Belmar. I was playing in the front yard when my uncle found out it was my birthday and said to me, “Let’s take a ride.” I climbed into his big black Cadillac and we drove about four blocks east to Snedeker’s Toy Shoppe, on the southwest corner of Mayfield and Superior roads.

Snedeker’s was not a huge place, but it had every kind of kids toy, game and trick you could want. My uncle, Danny Budin, who owned the then-famous Budin’s Delicatessen, was known for his generosity. Uncle Danny told me to pick out anything I wanted, for my birthday. I looked around and picked a teddy bear. He said, “Is that all you want? Get something else.” So, I got something else. He said, “Do you want anything else? How about that?” pointing at another toy. I said, “Okay.” Then he said, “How about one of those?” I said, “Okay.” That went on until I had picked 10 or 12 toys, with Uncle Danny laughing the whole time. Uncle Danny paid for the toys, Mrs. Snedeker stuffed them all into bags, and we went back home. It’s a great memory. And I can still picture that whole store from that day, as long ago as it was.

I went to Snedeker’s often. My mother used to walk there with me in my stroller. Then I would stop in on my way home from Roosevelt Junior High, and as a teenager, in the summers, on my way to Cumberland Park to play baseball. I would buy every new 25-cent practical joke they would get in: the hand buzzer; the pack of chewing gum that turned into, essentially, a mouse trap when someone tried to pull out a stick of gum; a real fly inside a plastic “ice cube”; a fake tooth at the end of a toothpick; imitation cigarettes that appeared to glow when you puffed on them; a telescope that put a black ring around the user’s eye; real chewing gum that tasted like garlic . . .

The store had disappeared by the time I started high school. A couple of years ago, I was looking around on a Cleveland Heights Facebook group. The subject of Snedeker’s came up and everyone who remembered it had fond memories of the place. Then, a someone named Art Snedeker appeared in the group.

I immediately asked Art the obvious question, and the answer was yes, the toy store was owned and operated by his parents, Arthur and Theresa Snedeker. Connecting with Art was like opening a little door to my past. He’s around my age and he got to hang out in the store. In fact, he and the store both came along around the same time. He was 11 when his parents let him start ringing up some customers. I was probably one of those he waited on.

“My parents claimed it was the first ‘full-time’ toy store in Cleveland,” Art said. “Full-time meaning it wasn't seasonal like the department stores, and that it only sold children's toys.” Art wasn’t allowed to play with the merchandise—though “somehow,” he said, “I did get my favorite toys at Christmas, for a kid of the ’50s—a Davy Crockett cap and rifle, Lincoln Logs, a Mickey Mouse hat, toy soldiers, Dinky toy army vehicles, a Hula Hoop, and my red Columbia, that I still had until my late 20s.”

Art was amused when I mentioned the little practical jokes I bought so many of, because, he said, that was his father’s favorite little area of the business, and his responsibility.

The Snedekers sold the business in 1960, and it stayed open, under their name, until the building was razed to build a car dealership. His parents, who had first met working for Best & Co., a clothing store in the Cedar-Fairmount district, went into the restaurant business, together, until retiring in the early ’80s.

Art went to college with the plan of majoring in pre-med. But during his first year at college, he said, he “started to ask some life questions of my friends and of the Newman Center chaplain. By my sophomore year I entered the seminary here in Cleveland, quite to the surprise of my family and many of my friends. I was ordained in 1974 and I served as everything from assistant pastor, pastor, and campus minister, to hospital chaplain and hospice chaplain. I began a medical retirement in 2011, and, although retired, I live at a local parish and help with Sunday and weekday Masses.”

He has spent a lot of his life bringing comfort to people—in both parts of his life.