You may be forgetting something 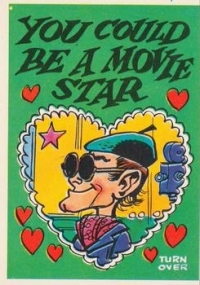 There is something that I think a lot of us are not thinking about this February. We are thinking about the pandemic, the economy, the change in U.S. presidents and administrations, the possibility of insurrection, if and when we can get vaccinated, and other issues that may be weighing heavily on us. Here in Cleveland Heights, we’re also thinking—because it’s normally the worst part of winter—about the ever-present potential for unlivable temperatures and massive snowfalls. And, for those with kids, if and when public schools are going to open for in-person learning, and whether that will be totally safe when they do.

What many of us are not thinking about is Valentine’s Day. And, I mean, what’s more February than Valentine’s Day? Other than Lincoln’s birthday. And my anniversary. Three good opportunities to eat candy. Why candy? Well, Valentine’s Day is self-explanatory. The other two . . . because it’s February and, around here, it’s dark and cold, and that calls for candy. In my opinion.

Why did we get married in February, in Cleveland? Because in December we decided to get married in January, when we’d be on a trip to Los Angeles. It was going to be 40 years since my parents got married in January in Los Angeles, so we thought that would be a good time. Until we figured out that my parents would be in Cleveland when we got married in Los Angeles, and they’d be annoyed that we didn’t have the wedding here. So, we planned a small wedding ceremony for soon after we got back, not thinking that a huge snowstorm could prevent our siblings from coming to Cleveland, which it did.

The storm hit Cleveland the day before and then moved right along and away from Cleveland. But it moved east and closed the airports our siblings were flying from. So, the wedding ceremony was even smaller than anticipated. But we had a party afterward, with a big Corbo’s cassata cake, for an expanded gathering of family and friends. It might have made more sense to do it in June. I mean, it was cold outside. But not inside.

Our anniversary is two days from Valentine’s Day. So, candy. And cards. That is: card (one of us doesn’t like greeting cards . . . even though I used to get paid for writing them). This year, I’m going to make two Valentine’s Day cards. For my grandchildren. They’re not in school. Last year, they were in preschool and this year the older one is in kindergarten at Fairfax, but not at Fairfax; she goes to school in a computer. Which she likes, by the way; and she’s learning. But no in-class Valentine exchange (if they still do that).

When I was in elementary school, at Coventry, our teachers had us make large, heavy-paper envelopes which we decorated and taped to the fronts of our desks. Then we walked around placing Valentine cards in each of them. I remember spending a lot of time deciding which card should go to which kid. And I loved the year that Topps produced cards called Funny Valentines, with sayings like: “Your teeth are like stars. . . . They come out at night. And: “Your skin looks like a million dollars. . . . Green and wrinkled.”

I’m not sure why this has stayed with me, but I remember that on Valentine’s Day when I was in second grade, when I was walking home from school with my large envelope of cards under my arm, a couple of kids who were goofing around accidentally bumped into me and knocked the envelope out of my hand and into the slushy gutter, as we waited for the light to change at the corner of Coventry and Mayfield, and that the Cleveland Heights policeman who was acting as the crossing guard there bent over and picked it up for me. It’s a warm memory, and one that I thought about often when police officers on Coventry were roughing me up, 10 years later, when I was a hippie hanging out on the street. But, still . . . it’s a nice memory. The first part.

When I was about 30 and working in the promotion department of a rock radio station, M105, downtown, on Valentine’s Day, I took a large mailing envelope and wrote “Place Valentines here” on it and taped it to the front of my desk. I actually received a few.

This year I’m going to make fancy Valentine cards to give to my grandchildren. With candy, of course.

It’s February, and it’s dark and cold. But it’s 2021. There’s a new president and administration. There’s a vaccine. The hours of daylight are getting longer every day. So, don’t forget about Valentine’s Day this year. Or candy.