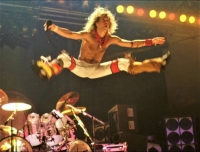 Just to be clear, this is not a picture of me. We generally don't do this in folk music concerts. This is David Lee Roth, presumably singing the line "Might as well jump."

By the time you read this, you probably will have missed seeing me jump off the couch. If I do that this year. And if anyone actually sees it happen. I’m writing this before Jan. 1, naturally, because this is the January edition, and it gets printed, so it’s not instant like an online-only publication is, and everything is written in advance. So, I don’t know if I’ll really jump off the couch. But the couch is lower than a chair, if you know what I mean. And I’m fairly certain you don’t.

A few weeks ago I read an essay online, written by my younger brother, Noah, that included this paragraph:

“When I was a child, probably around 8 or 9 years old, my mother read about a Danish New Year’s Eve tradition. The Danes, she discovered, jump off of chairs at the stroke of midnight, propelling themselves into the new year and leaving the Evil Spirits of the past year behind. Who knew that Evil Spirits couldn’t jump off of chairs? We did this in my house for several years, if you can picture it: my mother, my father, and me, all standing on furniture, watching our large, boxy TV set as the ball dropped in New York City, and the three of us clumsily leaping into our unknown future as Guy Lombardo and His Royal Canadians struck up ‘Auld Lang Syne’.”

I had totally forgotten about that chair-jumping thing. I was already out of the house by then—I’m 11 years older than Noah—but I heard a lot about it, and I'm pretty sure I witnessed it once or twice. Or else I was told about it and the image was so vivid and strange that it has given me a false memory of it.

The last New Year's Eve I spent at the house I grew up in, on Belmar, was when I was in what I laughingly refer to as the 12th grade (it was more like the 12th year that I sometimes walked into a school building). It was the 1966–67 New Year, so Noah was 6. My mother asked me if I would stay home with Noah so my parents could go out. I have never liked New Year’s Eve parties. I had a small number of my Heights High friends over. During the event, Noah drew a picture of the scene (sort of like a court reporter); then, the next day, my mother helped him with some writing on it. The only thing I remember about it is that someone was saying, "Wheee! More pop!" I remember because my friend Walt quoted that for many years afterward, whenever we were at a dull party.

But dull parties are preferable to me. New Year’s Eves are like any other night. This year, of course, I won’t have to worry about what not to do on New Year’s Eve. There are no parties to turn down. And Nighttown, at the end of my street, is temporarily closed again. So, it will be dinner at home for us. And TV. And . . . “Wheee! More pop!”

People everywhere are saying they’ll be glad to see 2020 go. But 2021 probably won’t be much different, at least for a while. Though there are some signs of hope. A new U.S. President and administration, and all that it entails. And maybe a COVID-19 vaccine. And, for me, winter walking.

I started walking in May. But I haven’t seen Cleveland Heights during the winter since the late 1970s. Since then, until this year, I have just stayed inside from November to April. If I had to go somewhere, I’d jump into the car, drive, get out at my destination and hurry inside. I haven’t even owned any cold-weather clothing for 40-some years—just a light coat and a pair of gloves I could never find.

This year I have a real winter coat, with a hood, from one of those sporty companies that everyone but I knew about; and heavy-duty gloves; even long underwear. And new boots that are made for walking, and that’s just what they’ll do. Yes, Cleveland Heights, one of these days these boots are gonna walk all over you.

And I’m going to have cataract surgeries. Not a big deal—everyone tells me. But I’ve been avoiding it for many years because almost nothing freaks me out more than the idea of someone sticking knives into my eyes. But I can’t see much. And, this year, it was much harder to say I couldn’t because I had a musical performance coming up, or anything else.

Much was different in 2020, and it looks like 2021 will include even more changes. So, I’m planning to jump off the couch—because it’s lower than a chair—at midnight on New Year’s Eve. This seems to be the year for taking leaps.