Millikin's wetlands and stream must be preserved 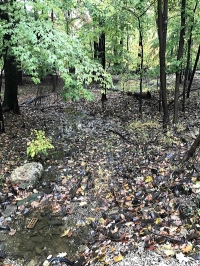 The fate of the Millikin school—11 acres, mainly densely wooded wetlands bordering Severance Center—is far from settled. There is a chance, in the foreseeable future, that the land will be transferred by the Cleveland Heights-University City School District [to the city of Cleveland Heights, and then] to a private residential developer.

Losing these woodlands would also [mean losing] the only place in the Heights where we, and our wildlife, can experience the headwaters of a stream that is part of our local watersheds, Dugway, Shaw and Nine Mile. The other starting points of these ancient streams are mostly covered by the past century’s concrete, asphalt, houses and businesses.

The “Severance” side-stream, part of the Dugway mélange of streams, begins in this forest.

After a rainfall, the stream’s flow is readily visible. The small forest around it is a wetlands, absorbing much of that rainfall. Elsewhere nearby, the rain mainly falls on hard, human-made surfaces and heads right on to Lake Erie through storm drains—but sometimes into our basements. The public is spending $3 billion—with fees [part of] your household bills—for necessary giant tunnels through the bedrock to hold aside the county’s overflow for a short time. These Millikin wetlands cost nothing, but do their part effortlessly.

The small stream is quickly put in a culvert pipe within the Severance area, with runoff from area surfaces likely being added [to it]. The stream culvert runs west, downhill, under South Taylor Road at the dip in the road at the traffic light midway between Mayfield Road and Euclid Heights Boulevard. The century-empty streambed can be puzzled out halfway down Rydalmount and Compton roads.

Past Compton, the Severance stream comes back into the open at Park Synagogue. The stream is integral to the design and layout of this beautiful building. Park Synagogue was designed and built (1947–51) by the renowned German architect Erich Mendelssohn, who had taken refuge from the Nazis in the United States in 1941.

The synagogue does not face east, as is traditional, because its placement is determined in significant part by the Severance stream’s course. It is likely Frank Lloyd Wright’s Fallingwater in western Pennsylvania, and other works, were an influence.

The Severance stream is then put back into a culvert as it passes under Mayfield Road. The culvert goes under Lee Road at Forest Hill Presbyterian Church, and the stream comes into the open for the last time in Forest Hill Park.

There, walkers can experience the Severance stream as it runs in a fairly deep-cut ravine between the Forest Hill playing fields to the north, and the CH Community Center to the south. Then, still in the park, the stream from Severance merges into the east branch of Dugway Brook.

Millikin’s woods and stream are not incidental or accidental. They must be preserved.

Jim Miller has been a resident of Cleveland Heights since 1985. For more than 10 years, he has been documenting local streams, such as Dugway Brook, Nine Mile Creek, and Green Creek in photo essays and videos (accessible on YouTube).