Back on the streets again 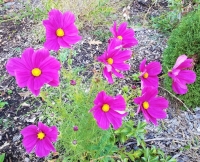 One of many pictures I took of flowers blooming in a yard in October. Who knew flowers still bloomed in October? I mean, other than probably everyone except me.

One of Ellen DeGeneres’s first jokes was: “My grandmother started walking five miles a day when she was 60. She's 97 now, and we don't know where the heck she is.”

I was older than 60 when I started walking. That was six months ago, and, as I wrote in this column in September, I really hadn’t walked with any regularity, for any more than a couple of blocks (to the store), in about 40 years. But after doing nothing but sitting at my desk for the first two months of the pandemic—plus most of the past two years, since I developed a hearing problem; or, really, for much of the previous 38-or-so years—I knew I had to do something.

The first time I walked, I saw some things that I thought looked interesting, so I stopped and took pictures of them. I thought maybe I'd show them to some people. I did. I posted them, all together, on Facebook, and just said they were photos of random scenery in my neighborhood. To my surprise, many people liked them and commented on them.

So, I thought, that’s my new thing. Walking and taking pictures to post on Facebook. That was great motivation (mainly in that it gave me any motivation). It also made me go in different directions every day, to photograph new things. But there are only so many directions.

After a while, when I’d gotten up to two miles at a time. I started asking my wife to drop me off in different locations, two miles away, so I could walk back. To her disappointment, I kept finding my way back home. I mean, it wasn’t exactly orienteering. I’ve lived in Cleveland Heights all my life (except for when I left town for a few years).

I walk between two and three miles a day now. And throughout all of this, I’ve learned quite a bit. For instance, that many people grow flowers in front of their houses. You probably knew that. But when I used to walk these same streets all the time, 40 and more years ago, there weren’t nearly as many flower gardens. I took many pictures of flowers and posted them once a month for six months, each with that month’s flowers, which, I also remembered, change throughout the growing seasons.

I learned that there are benches all around Cleveland Heights, most placed by the city, some on private property, but still mostly open to the public. In light of that, I developed a new motto: “Leave no bench un-sat-in.” That’s my motto and I’m a firm believer in that practice.

I learned that there are many houses with colorfully painted front doors. When we moved into our current house, about 35 years ago, we had the front door painted purple. Ours was the only colorful door on the block, or almost anywhere around here. Now there are many, all over the place, though ours has been replaced with a non-colorful one. I posted two batches of about 15 pictures each of colorful Cleveland Heights front doors. I could post a few more batches, but that’s probably enough for people to get the idea.

I learned that there are places with built-in one-mile flat walking surfaces, like in Cumberland Park and Mayfield Cemetery (not the adjacent Lake View Cemetery, which is where they decided to place all the hills).

I learned that there are hidden walks, like the clearly, though subtly, marked trails through the little wooded area immediately to the north of the community center parking lot. A few steps inside that area and you can forget that you’re in the middle of a city.

And there are seasonal photo-ops, like the Halloween decorations on Scarborough—or as they re-dub it, “Scare-borough,” for the occasion—and the streets around it. I think that kind of thing is especially important this year, when not nearly as many kids were expected to go trick-or-treating. At least families could walk or drive up and down the streets during October and look at those displays, some of which (or should I say “witch”?) were elaborate.

Throughout all of this walking and picture-taking, I also learned a lot of the history of Cleveland Heights, because I would come home and look it up. I’d research something I’d seen that looked like it must have some interesting history. That was usually correct. So, go ahead—ask me something about some part of the city. If I walked there, I probably know at least a little bit about it now.

Unlike Ellen DeGeneres’s grandmother, I started walking when I was older than 60. And I’m nowhere near 97. And I do know where I am—and where I’ve been.