CH ballot Issue 6 is one step in transition 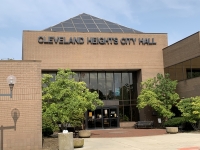 On the Nov. 3 election ballot, Cleveland Heights voters are being asked to vote ‘yes’ or ‘no’ on Issue 6—a proposed city charter amendment that reads as follows:

“Shall Article VII, Sections 3, 4, and 5 of the Charter of the City of Cleveland Heights be amended to provide that candidates for all elected offices shall file petitions with the election authorities not later than 4:00 p.m. on the ninetieth (90th) day prior to the date set for the primary election?”

Ballot Issue 6 pertains to the city’s mayoral elections—the first of which will take place in fall 2021. In November 2019, CH voters approved ballot Issue 26, a charter amendment to change the city’s government from the current council-manager form to a mayor-council form, in which residents directly elect the city’s mayor. The winning candidate in November 2021 will take office on Jan. 1, 2022.

This year’s ballot issue is intended to clarify ambiguity in the city’s charter. According to Mayor/President of Council Jason Stein, “The way the charter is currently written, candidates have 180 days to collect signatures, and not less than 90 days to turn them in, but [it] doesn’t specify primary or general election, so [that] could be open to interpretation, which will cause confusion for those who are running, voting, and the board of elections.”

If this is not made clear, said Stein, “the election could be contested.”

A primary election for mayor is mandated, said Stein, when there are more than two candidates. While the Issue 6 language does not specify it applies only to the mayoral race, Stein said, “I don’t believe there is a change for council.”

If a primary election is needed, it will take place on the first Tuesday after the second Monday in September.

Asked what happens if voters don’t pass Issue 6, Stein said that would be “open to interpretation.”

Tony Cuda, the former campaign manager for Citizens for an Elected Mayor (CEM)—the group of residents who put last year’s Issue 26 on the ballot, and crafted the Issue 26 language—commented, “We want clarity. We don’t want any kind of challenge to the [mayoral] election. That would be a terrible outcome. That’s why it is important that Issue 6 pass.”

If Issue 6 does pass, it’s one of many steps the city must undertake to prepare for its transition to the new mayor-council form of government.

For his part, Stein said, “We are on schedule for the transition,” and “prepared to hand it off to the new leadership seamlessly. City council is addressing issues that need to be addressed prior to the transition.”

Stein advised that “the city should go line-by-line through the city [ordinances] to make sure things are in-line. This will happen through the law department or a third party.”

Stein was unsure if the city would post information on its website about the transition process and steps, and advised those interested to attend council meetings.

“There is no city council transition committee, but [we] have worked with CEM on what they felt council should be looking at, that can’t wait for the [new] mayor and new council, such as Issue 6 and mayoral salary,” said Stein.

It was a member of CEM, Len Friedson, who asked the mayor to look into the need to clarify the city’s charter via Issue 6. At council's request, the city’s law director, William Hanna, drafted the ballot issue’s language.

“CEM is still intact,” said Cuda, “and was asked by council to do certain tasks.”

Five of its members—Cuda, Rhonda Davis-Lovejoy, Susan Efroymson, Len Friedson and Carla Rautenberg—comprise the CEM Transition Subcommittee, and are advising council on issues related to the transition to the mayor-council form of government. [Rhonda Davis-Lovejoy is a member of the board of directors of FutureHeights, the nonprofit development corporation that publishes the Heights Observer.]

Key 2021 dates and deadlines for CH mayoral candidates, as identified by CEM, are:

Mayoral salary for the directly elected mayor is one detail of the transition that Stein anticipates council will vote on prior to the Nov. 3 election. The proposed salary, $115,000, will have its second reading at the Oct. 5 CH City Council meeting, at which time Stein expects council to approve it.

Other issues, such as the city administrator’s salary, will likely “be left for the new mayor and council to decide,” said Stein. According to the city’s charter, the directly elected mayor will appoint a city administrator, subject to council approval.

Stein noted that Acting City Manager Susanna Niermann O’Neil and her administrative team are working on transition issues, and that the former city manager, Tanisha Briley, “was clear that preparation at department levels would ensure the mayor was prepared to take over.” Stein added, “She said she would be open to having a meeting with candidates for mayor, to enable them to learn about the city. I think Susanna will offer that as well.”

According to Cuda, council’s Committee of the Whole will handle the discussion of the transition. “There are lots of other elements of our [city ordinances] that will need to be changed by the end of 2021,” Cuda explained. “Bill Hanna will be working on that. Susanna Niermann O’Neil said she would 'work hard' on this, but we aren’t sure what 'this' is. She may be best qualified to do it. Tanisha Briley [the former city manager] refused to do it.”

Cuda advised, “Council needs to create a process by which the charter is further reviewed and possibly amended.”

One member of council, Kahlil Seren, has declared his intention to run for mayor in 2021, and at least one other council member is widely rumored to be running. Asked at what point, if any, council members who decide to run for mayor need to recuse themselves from related votes, Stein said, "They need to announce that they are running for mayor, but they can still vote.

“Bill Hanna made a ruling on Kahlil voting on the mayor’s salary. He said that he was not prohibited from doing so.” Stein could not recall if the law director said anything about that changing at some point, such as [when] a candidate pulls a petition to officially run.

In the meantime, said Stein, “The city continues to move forward and there are a lot of needs that we can’t neglect—making sure that the city is functioning and getting through the pandemic, working to ensure that we come out stronger than we went into it.”

Stein expressed concern for the financial well-being of residents, noting that there is 20 percent unemployment in the city. “How can we assist those facing eviction, foreclosures? We need to find out how we can help them,” said Stein.

Asked about recent shootings in the city, Stein described them as “shocking, scary, and unprecedented.” He expressed his confidence in Police Chief Annette Mecklenburg, who he said is formulating a plan, and the acting city manager, and said council will give the CHPD the resources it needs.

As this issue went to press, CH City Council had yet to fill the council vacancy created with Melissa Yasinow’s March 2 resignation, leaving residents to speculate that the six current council members are deadlocked on choosing a replacement from the four finalists announced in May. [Tony Cuda, a member of CEM, is one of the finalists. The others are Craig Cobb (a FutureHeights board member), Anthony Mattox Jr. (also a FutureHeights board member), and Robert Koonce.]

Commenting on that process, Stein said, “Council has had numerous executive session meetings and has talked about it individually. It’s been a long process; however, we think it shows the strength of our democratic system. This council is really working hard and not abdicating their role in choosing another leader. We need four votes to appoint someone, and I am hopeful that we will eventually get there. We are not going to give up. I will call for additional meetings if necessary until we do appoint someone. There is not a member of council that isn’t losing sleep over this. Each one is thinking of the best interests of the city.”

If council does select someone to fill the vacancy, he or she will serve out the seat’s current term, which will expire on Dec. 31, 2021. During council’s May 18 Committee of the Whole meeting, Stein reminded council members that, under the CH City Charter, “no choice has to be made”—i.e., council is not required to choose someone.

In neighboring University Heights, that city’s charter sets forth a clear procedure for the appointment of a new council member. It specifies that council has 30 days to fill a vacancy; if council is unable to do so, the mayor becomes responsible for choosing the appointee.