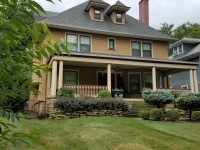 This is that Halloween-party house today, not far from where I live now. I see that the mail slot is still in the front door. Maybe I should go and dump some candy in it.

I had a friend, John, who took so much LSD and other drugs that he kind of fried his brains. I met him in the late ’60s, in the Cleveland Heights folk music club Farragher’s, where he sometimes performed.

I lost track of him for a while, but then I started running run into him all over Cleveland Heights during the ’80s and ’90s. Conversations always began pleasantly, but quickly deteriorated into either paranoia (his, not mine) or just plain madness (again, his . . . I think). I saw him once near the Cedar Lee Theatre, and our conversation seemed innocuous enough, until he suddenly said, “So. You’re one of them?” I knew where that was headed, so I said, “Woah—look at the time. Gotta go.”

Another time, my wife and I were leaving a concert at Cain Park and John spotted us. He worked his way through the crowd, as though he had something urgent to tell her. “Dave and I were at a Halloween party at Pete Dartmouth’s house in 1967,” he said, “and there was a big mail slot in the front door, and when trick-or-treaters rang the doorbell, Dave would put on a black glove and stick his hand out through the mail slot and take a piece of candy out of their bags, and they would run away.”

Whew! Typically wacky story. He told the tale, laughed, and disappeared back into the crowd. My wife looked at me to try to gauge the degree of craziness. “Uhh . . . you know what?” I said. “That one is true.”

I was 18 and, essentially, homeless at that time—meaning that I didn’t have a permanent place to live. But, also, it was the hippie era, so I could usually find a place to crash and hang out. Usually. And that Halloween-party house was a place I stayed quite often. It had been purchased by Pete Dartmouth, a young guy—about 26 years old in 1967—who had moved here from California (for some reason), had a lot of money (from some unknown source), was a music fan and audiophile, and believed he could buy a bunch of friends. He was correct. He bought a bunch of friends.

Pete acquired this big house, started hanging out at Farragher’s, and told all the local folk and rock musicians he met that he was building a recording studio in his basement. And, also, that any of us could stay at the house. He finished the basement and installed a state-of-the-art studio in it. In the house, he stocked a big refrigerator with food, got a color TV, and opened up his home and studio to us. We all recorded demos for free. But he also charged money for some bands to record there.

I started helping him in the studio and control room. That was my first recording experience, and I learned a lot. I met several musicians from other parts of town, many of whom are still my friends. I also stayed there on numerous nights. And if I couldn’t find an empty bedroom, which was often the case, I just slept on the studio floor, covered by my jacket. I have surprisingly fond memories of sleeping on that studio floor.

But soon everyone left town, mostly for Los Angeles. John’s band signed with RCA Records. I went to New York City. I got into a band that later became famous (without me). I remained homeless for a while in NYC. I ran into a band I had met when they recorded a demo in Pete’s studio, from which they got a contract with Columbia Records, and I lived with them in their one hotel room for weeks, while they recorded an album. I got signed to Sire Records (by the guy who had written and produced and played on the original hit record of "I Want Candy"), and I moved into an apartment. But that hippie-era tribal, let’s-all-help-each-other thing was an amazing experience and has affected me to this day. We could use more of that now. Wait—did I say “more”? Sorry—I meant “any.”

So, I wound up, one year after that Halloween party, producing records in New York, partly based on that basement-studio experience. And I didn’t steal candy anymore. Much.