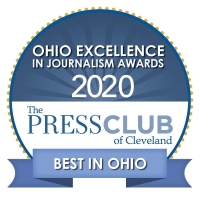 The Heights Observer was named “Ohio’s Best Community Newspaper” at an online ceremony Aug. 7 for the Press Club of Cleveland’s annual All-Ohio Excellence In Journalism program. The award doesn’t include daily newspapers, which are judged in a separate category.

Under the rules, five of their columns from 2019 were reviewed. The columns submitted in their entry were those that ran in April, May, August, October and November 2019. (All back-issues can be accessed online at heightsobserver.org/download-issues/).

Commenting on their column, the awarding judge wrote: “Oh, that every community would have people this dedicated to making Democracy work!!! Truly an inspiration.”

The awards program, now in its 42nd year, supports and recognizes quality journalism across Ohio. It includes all media—from large daily newspapers and community weeklies to magazines, trade journals, websites, TV and radio. More than 700 entries were submitted in the various categories of the competition, and were judged by journalists from other press clubs outside the state.

This is the first time the Observer has won the “Best of Ohio” honors. The two previous years, it placed second behind the Cleveland Jewish News. This year, the Jewish News placed second.

The judges commented, the Heights Observer is “clearly committed to community news and in touch with their audience. A pleasure to review.” The award was based on a review of three complete 2019 issues of the paper.

“We are honored to be recognized by the Press Club of Cleveland. It is a testament to this community that so many of our residents care about building a strong community and take the time to send us news articles and opinions,” said Deanna Bremer Fisher, who as executive director of FutureHeights is also the Heights Observer’s publisher. “I am grateful for our talented and dedicated staff. They go above and beyond the small amount of financial compensation we are able to give them to produce a high quality publication each and every month. They are amazing.”

Cleveland Heights resident Bob Rosenbaum is co-chair of the Heights Observer Advisory Committee, and is responsible for its advertising sales and market development. He also serves on the board of the Press Club of Cleveland.