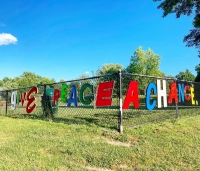 March 29 marked the second anniversary of Heights Libraries taking control of the Coventry P.E.A.C.E. property, which comprises the beloved playground, adjacent greenspace and the former Coventry School building. At the time, the future for the building’s tenants—arts and community-service nonprofits—looked bright. Today, however, they face eviction. Again.

Amid recent negotiations for a long-term lease, Heights Libraries issued a July 9 press release that casts the tenants as disorganized, and raised the possibility of tearing the building down in order to . . . well, that’s not clear. The situation is eerily reminiscent of the handling of the property in 2017.

A full history is available at the Coventry PEACE Campus website.

After Heights Libraries purchased the property in 2018 for $1 from the CH-UH school district, the 501(c)3 nonprofit Coventry P.E.A.C.E. Inc. board, then a playground association, transferred its nonprofit status to the newly formed Coventry PEACE Campus (CPC) group. CPC's mission states, “Coventry PEACE, Inc. provides a sustainable, supportive and collaborative facility for organizations that offer artistic and educational opportunities and community services for residents of the Heights and Greater Cleveland.”

In the two years since the property transfer, one of the members of CPC, ARTFUL, has expanded from 16 artist studios to 25. Cleveland Arts Prize-winner, and co-founder of Parade the Circle, Robin VanLear has moved into the building, as has the Cleveland Heights Teachers’ Union.

CPC, which also includes Ensemble Theatre, Lake Erie Ink, Family Connections, FutureHeights, Reaching Heights, and therapist Sherri Skedel, has made several improvements to the interior of the building, and has paid nearly $300,000 in rent that has covered operating costs and begun to address deferred maintenance.

While CPC has worked to bring down operating costs and has seen monthly costs consistently decrease over the last four quarters, further improvements can be made, such as converting the lights to LED, and enabling the group to control the HVAC system settings to adjust for the fact that the building has been closed to the public during the pandemic.

In summer of 2019, the National Endowment for the Arts (NEA) selected CPC from among 200 applicants to participate in a creative placemaking workshop in Washington, D.C. CPC representative and Ensemble Theatre Director Celeste Cosentino, and Cleveland Heights' then-mayor, Carol Roe, attended the workshop with five other groups from around the country whose projects were selected based on their potential to be a successful candidate for an “Our Town” grant through the NEA. The primary need identified during the workshop was for a stronger partnership between local government and CPC.

In fall 2019, IFF, a mission-driven lender and real estate consultant, selected CPC as one of two pilot projects in the state of Ohio for a Facility Feasibility Analysis. IFF provided a grant from Fifth Third Bank to cover the majority of the study, and FutureHeights secured an additional grant from the Cleveland Foundation to cover the balance. The study provided a detailed list of necessary building improvements to address maintenance issues, as well as renovations to enable the building to operate more efficiently in its new use as a cultural center. The study also included financial analysis, which enabled CPC to create a first draft of an operating Pro Forma for the building, which it presented to the Heights Libraries Board of Directors in February 2020.

Heights Libraries stated its desire to work out an agreement with CPC for a long-term ground lease of the building no later than July 1, 2020, when the tenants’ current leases were due to expire.

In March 2020, the Covid-19 pandemic began and CPC temporarily closed the building, bringing future planning to a halt.

In response to the pandemic, each CPC member nonprofit moved its programs and services to a virtual format to the extent possible, adjusted its operating budgets to account for a reduction in earned revenues, and canceled or postponed fundraising events. By state mandate, Ensemble Theatre has not been able to operate since March, and performance artists have seen their revenues dry up as many community events have been canceled.

On June 2, CPC received a Letter of Intent (LOI) from Heights Libraries outlining a one-year bridge lease with CPC, with the possibility of negotiating a long-term ground lease. The library asked that CPC respond within seven days. CPC requested that, due to the impact of Covid-19 on the tenants and the complexity of a potential agreement, the library extend the current leases for one year.

Heights Libraries rejected that request and asked CPC to respond in writing to the LOI. CPC responded as requested on June 12. Heights Libraries sent a revised LOI on July 1, the major changes being a request for signature on the LOI and a cash payment of $25,000 by Aug. 1.

On July 9, Chris Mosby, a reporter with Cleveland Heights Patch, contacted CPC tenants to ask for a response to a press release Heights Libraries had issued. CPC issued a statement in response to the release, stating, “We are shocked and blindsided by the press release the Library sent out today. We've been negotiating in good faith while trying to survive a pandemic that has effectively shut us down for the foreseeable future. We've been frustrated by the negotiations at times, but we kept it to ourselves in the interests of achieving what we thought was a shared goal and viable partnership. As recently as May 25, the Library spokesperson stated, ‘We continue to work toward a day when the Board of Coventry P.E.A.C.E. Campus can execute a lease with us, but we realize it may have to be postponed due to the new financial pressures on the tenants.’ But today's statement, which badly mischaracterizes the situation and ends with the possibility of just tearing down the building, is very disappointing. We will continue to do our part to keep the lines of communication open and remain hopeful we can sit down to find a reasonable solution.”

On July 13, Heights Libraries extended an invitation to CPC to make a five-minute statement during the public comments portion of its July 20 board meeting, which will be held virtually and available for viewing via Facebook Live.

Community members who wish to make comments during the meeting may contact Heights Libraries Marketing and Communications Manager Sheryl Banks at sbanks@heightslibrary.org or 216-932-3600, extension 1277.

Frank W. Lewis is a writer and editor, and neighbor of Coventry P.E.A.C.E. Campus.

FutureHeights, one of the Coventy PEACE tenants, publishes the Heights Observer.