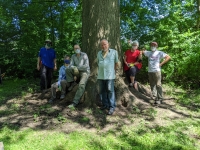 The Bradford Cinder Path is buzzing with activity. Strollers and dog walkers, joggers and families all share the path. It’s the perfect place to learn to ride a bicycle. During a normal school year, it’s a great shortcut to get to school.

A group of neighbors, Friends of the Bradford Cinder Path, have come together, united in the desire to prepare the path for its second century. [See the related June 2020 Heights Observer article, “A look back and ahead at the Bradford cinder path,” by Marian Morton and Peggy Spaeth.]

The volunteers plan to partner with the city and its neighbors to preserve the path’s mature trees and replace invasive plants with carefully selected native trees and shrubs. They intend to retain the path’s shady beauty, and create a long-term plan for the maintenance of this much-loved path.

A small, recent change was the removal of invasive plants from around two large red oak trees (Quercus rubra) in the Princeton-Canterbury section of the path. Measurements were taken of the circumference of both trees, and the volunteers confidently report that these two trees have been in place much longer than the path. The current estimate is that the oak at the Canterbury end of the path is more than 200 years old; based on its diameter, it could be 230 years old.

Most of the plants removed were buckthorn, brought by Europeans to America as an ornamental shrub. This is one of the most-invasive plants in Ohio, and the Bradford path is overrun with it. It grows in a variety of conditions and crowds out native plants. It is spread by seeds, and can grow as tall as 20 feet. Its leaves emerge early, and it keeps its leaves longer than other plants in the fall, further crowding them out.

Buckthorn also is not a source of nutrients to native birds, bees and other pollinators. For them, a stand of buckthorn is a green desert, and buckthorn berries have a laxative effect that can cause death in birds.

Cutting the plant back doesn’t help, because it will just vigorously grow back. Specific techniques have been developed to remove it. They include pulling out small buckthorns, including the roots; using a special tool called a Weed Wrench (one can be borrowed from the Home Repair Resource Center's tool library); and smothering the plant by covering it with heavy black plastic, to block all light. Removing buckthorn from the cinder path is going to be a long process. As it is removed, volunteers will be planting suitable alternative native shrubbery.

Debra Franke is a five-year resident of Cleveland Heights. She and her husband selected Cleveland Heights as their retirement home, and moved here from York, Pa. In retirement, Franke has time to indulge her interest in gardening.